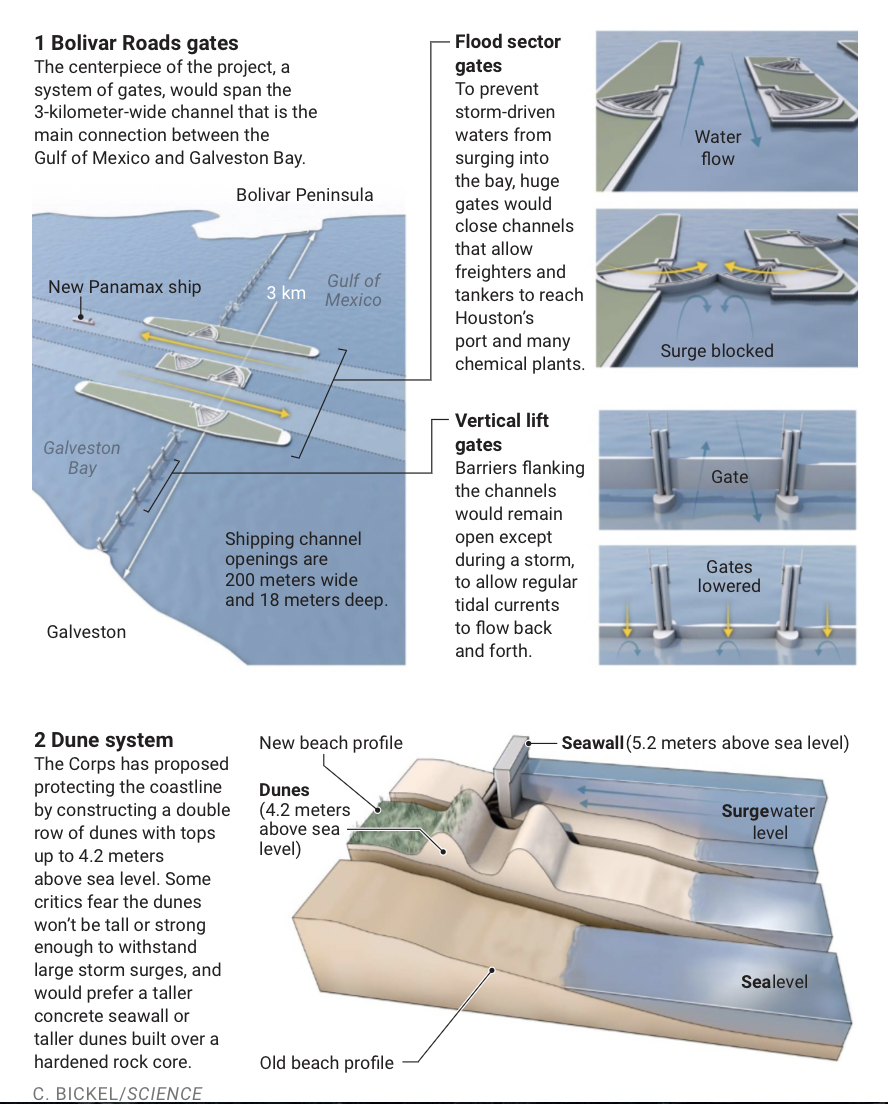 TX - Shelter from the storm: Can a giant flood barrier protect Texas cities from hurricanes?

GALVESTON, TEXAS—Plans for one of the world’s biggest and most expensive flood barriers were born in a second-floor apartment here in this city on the Gulf of Mexico, as water 4 meters deep filled the street below.

In September 2008, Bill Merrell, an oceanographer at Texas A&M University, Galveston, was trapped with his wife, daughter, grandson, and “two annoying chihuahuas” in the historic building he owns. Outside, 180-kilometer-per-hour winds generated by Hurricane Ike rattled windows and drove water from the gulf and Galveston Bay into the city.

As saltwater swirled through the shops and restaurants downstairs, Merrell sat in his office and sketched plans for a project he hoped would put an end to the storm-driven flooding that had repeatedly devastated this part of Texas.

It was an ambitious vision: Seventy kilometers of seawalls rising 5 meters above sea level would stretch the length of Galveston Island and beyond. Enormous gates would span the 3-kilometer-wide channel through which ships pass in and out of Galveston Bay. The defensive perimeter would seal off not just Galveston, but the whole bay, with Houston at its far end, protecting more than 6 million people and the country’s largest collection of chemical plants and oil refineries.

Though Merrell had spent decades studying ocean currents and storm surges, he had no engineering experience. But as he watched the murky waters soak the city, including his own carefully restored 19th century landmark, he decided there had to be a better way. “The Dutch would never put up with this,” he said to his wife.

Today, that first brainstorm has morphed into a $31 billion plan from the U.S. Army Corps of Engineers, the nation’s builder of mammoth water infrastructure. The state of Texas has embraced the idea, creating a taxing district to help pay its share. In July, Congress authorized the Corps to proceed—though it has yet to appropriate money for construction.

The project would be the costliest ever built by the agency. By some measures it would dwarf anything else in the world. The sea gates meant to block gulf waters from Galveston Bay would span a gap bigger than the famous pivoting Maeslant barriers that hold back the North Sea near Rotterdam, Netherlands. “Everything is bigger in Texas,” quips Bas Jonkman, a civil engineer and water-control expert at the Delft University of Technology (TU Delft).

Dutch experts like Jonkman are in high demand these days. Around the world, from New York City to Singapore, governments are planning massive seawalls and other measures to ward off the rising seas and intensifying storms expected from climate change. “A lot of countries are really thinking through now: ‘How should we defend ourselves?’” says Marc Walraven, a senior adviser on storm surge barriers to the Dutch government. In the process, each country or city is confronting similar trade-offs: between protecting people and preserving ecosystems, between technically sensible designs and aesthetically acceptable ones, between maximal protection and what’s affordable.

In Galveston, Merrell and some other scientists think the Corps hasn’t struck the right balance. Merrell warns that its plan—a scaled-down version of his original blueprint—is destined to fail, perhaps catastrophically. “It’s too weak—[the defenses] would only stand up to like a 30-year storm,” he says. “Essentially you don’t have any protection” against the more extreme storms that have already left deep scars on Galveston—and are likely, as climate change advances, to leave more.