Gulf of Mexico
This is the official forecast at 10pm CT Monday, August 24. The Houston metro area is outlined. via National Hurricane Center 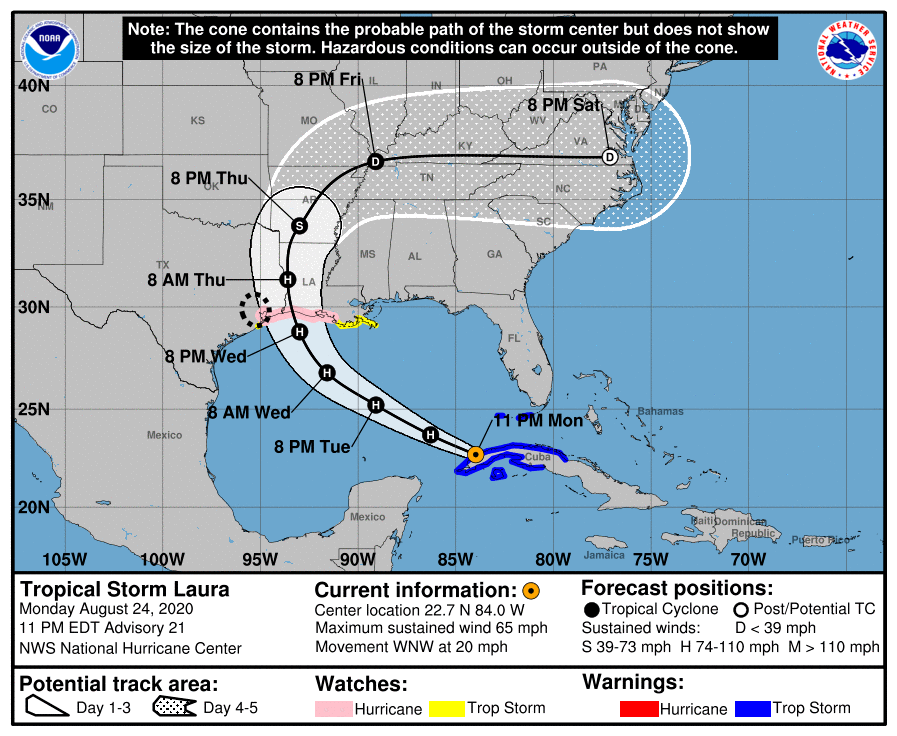 It would have been hell for a sprawling city already in the grips of a pandemic.

Not good, he instinctively knew.

The Houston meteorologist had crashed late on Monday, August 24. Before hitting the mattress around midnight, he left instructions to be awakened if the forecast for Hurricane Laura took a turn for the worse. And now it had. By early Tuesday, the overnight model guidance indicated a high probability the storm may take a more westerly track across the Gulf of Mexico and strike the fourth-largest US city.

Evans serves as “meteorologist in charge” of the National Weather Service office that covers the Houston-Galveston region, which has a population well north of 7 million. One of the forecasters at his office had just been briefed by the National Hurricane Center. Concerns were rising about a strike near Houston.

So Evans rubbed his eyes as he checked the forecast models for himself, at home, in the middle of the night. As he reviewed the latest data, the outlook appeared pretty grim. The world’s best forecast model, run by a Europe-based organization, projected a landfall near Houston. Moreover, its ensemble suite, which provides broader perspective, showed a landfall farther south. This represented pretty much the worst-case scenario for the largest city on the Gulf of Mexico.

Houston would lie to the right of such a landfalling hurricane, taking the full force of its screaming winds and watching neighborhoods flatten. Massive waves would roll into Galveston Bay and, from there, funnel into the Houston Ship Channel. There, barely a dozen feet above sea level, large refineries process about 15 percent of the nation’s petroleum. Countless other chemical companies also have facilities along the waterway. The economic and environmental catastrophe would be almost beyond calculation.

Evans also thought about his own situation. He lived near the National Weather Service office, which is located a few miles from Galveston Bay. Evans spared a few minutes to consider how best to prepare his home for the worst, and whether his wife and their 40- and 80-pound dogs should evacuate.

After quickly assessing the forecast, Evans picked up his cell phone and texted Jeff Lindner, the lead forecaster at Harris County Flood Control District. Evans wanted to make sure officials at Harris County knew what was happening and understood the heightened threat faced by the community.