Gulf of Mexico
This map, credited to the Texas Department of Transportation, details the location of the proposed Bluewater Texas Terminal Deepwater Port project. 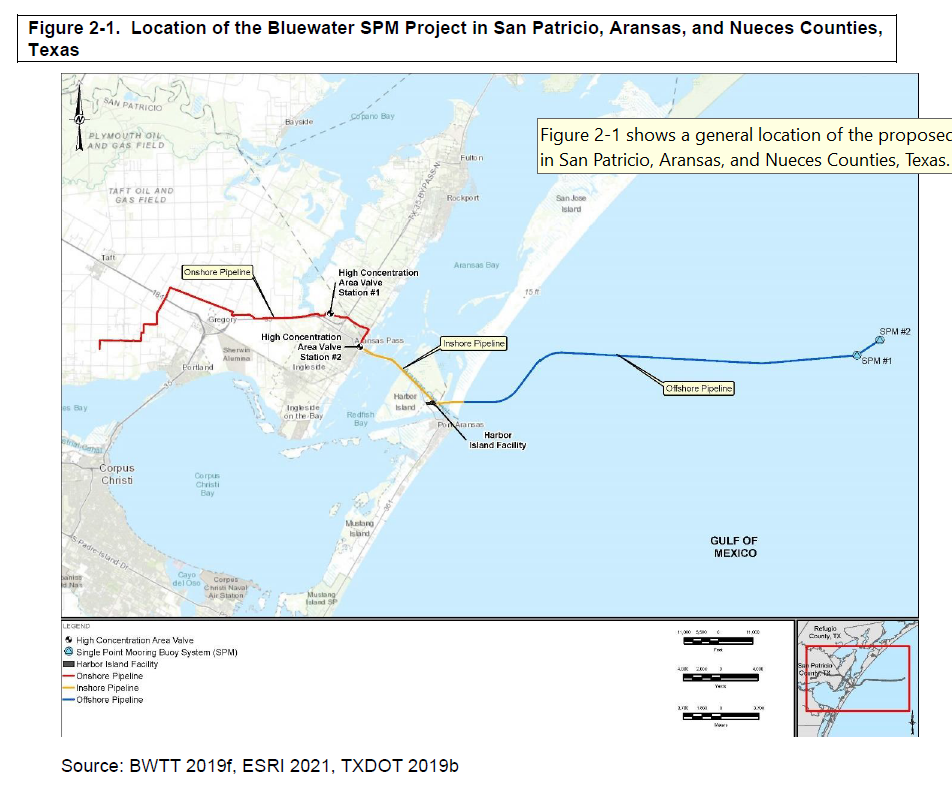 Recently released records detailing the construction and impacts of a proposed deepwater port are up for public comment.

The documents include a public notice issued by the U.S. Army Corps of Engineers – which delves into the work that would be associated with the project – and a draft environmental impact statement, posted to the website of the U.S. Department of Transportation's Maritime Administration.

Records show also about 55 miles of new pipeline shuttling product from a storage facility in San Patricio County to the deepwater port, located about 17 miles from Corpus Christi's coast in the Gulf of Mexico, records show.

The export terminal, if brought to fruition, is anticipated to accommodate very large crude carriers, according to officials.

Critics of the project have said it would endanger the surrounding habitats, while company officials have said environmental impacts would be minimized. In a video earlier this month, the company stated that efforts would include using best available technology.

Although the draft environmental impact statement will be a component in the U.S. Army Corps of Engineers’ permitting decisions, there is an opportunity to comment on it independently.

In an executive summary of the 686-page document, U.S. Coast Guard officials wrote that by using mitigation measures and best management practices “the impacts of the proposed Project when combined with those of other projects would not result in major cumulative impacts.”

Messages posted to the maritime administration's website show a mix of support and opposition. Some commenters voice concerns about the general impacts of the project. One also questions the thoroughness of the study.

The draft environmental impact statement will be taken into account as part of its review, according to the U.S. Army Corps of Engineers’ notice.

How to find the documents

Documents are available on each agency's website for review.

The U.S. Army Corps of Engineers' public notice is listed under SWG-2019-00174. The deadline for public comment on the notice is Dec. 20.

The draft environmental impact study is on the maritime administration's website under docket MARAD-2019-0094.

Kirsten Crow covers government, industry and development in South Texas.Support local news by checking out our subscription options and special offers at Caller.com/subscribe

This article originally appeared on Corpus Christi Caller Times: A proposed deepwater port in the Coastal Bend is up for public comment