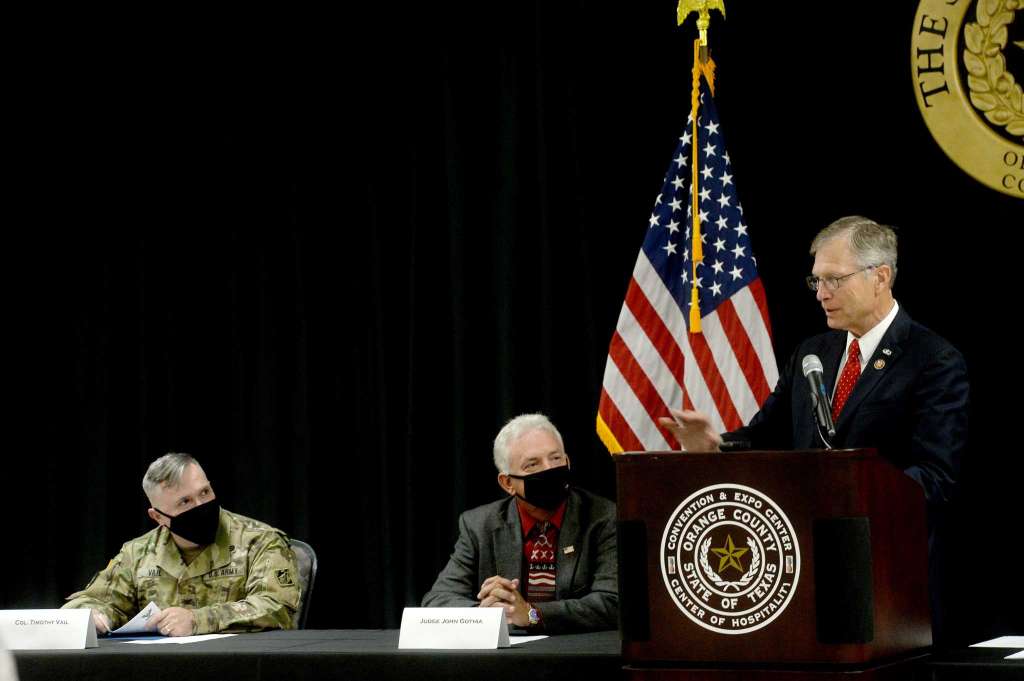 Orange County leaders gathered with others from the state and federal level Monday at the Orange County Convention & Visitors Bureau for a ceremonial signing of a levee project agreement, which aims to protect Orange County from storm surge incidents.

The project agreement comes a month after Orange County Judge John Gothia and Orange County Drainage District General Manager Don Carona said they expected “total devastation” from Hurricane Laura, which wobbled at the last minute, hitting Lake Charles and surrrounding Louisiana communities with the level of damage to which Orange officials locally had somberly resigned themselves.

Now, they have hope instead of resignation for such future storm predictions.

“We are pleased to work with the USACE and Orange County leaders on this monumental project,” said Texas Land Commissioner George P. Bush. “This signing agreement is an important milestone in our efforts to protect, reinforce and strengthen the Texas coast. Texas citizens trust in their local leaders to ensure that their coastal livelihood is sustained — and the Sabine to Galveston study demonstrates the initiative to do exactly that.”

Bush’s sentiments were seconded by the U.S. Army Corps of Engineers.

“We are in a great partnership,” said Col. Timothy Vail, Galveston district commander, “and the Corps, the GLO and Orange County are great partners in our quest to make not just the design of the project a reality, but the construction of the project. It’s a long process before we start moving dirt, but the design agreement is a major milestone in getting closer to building a world-class hurricane storm surge protection system in Orange County.”

Local officials who’ve dealt with the repeated impact of flooding attested to the significance of the project.

“The Orange County portion of the levee project will protect citizens, the economy and the environment from storm surges and flooding,” Gothia said. “I am grateful for the collaboration of all of the governmental organizations from the local to the federal groups that have worked together to bring this project to this stage.”