Gulf of Mexico
Chris Stokes for The Texas Tribune 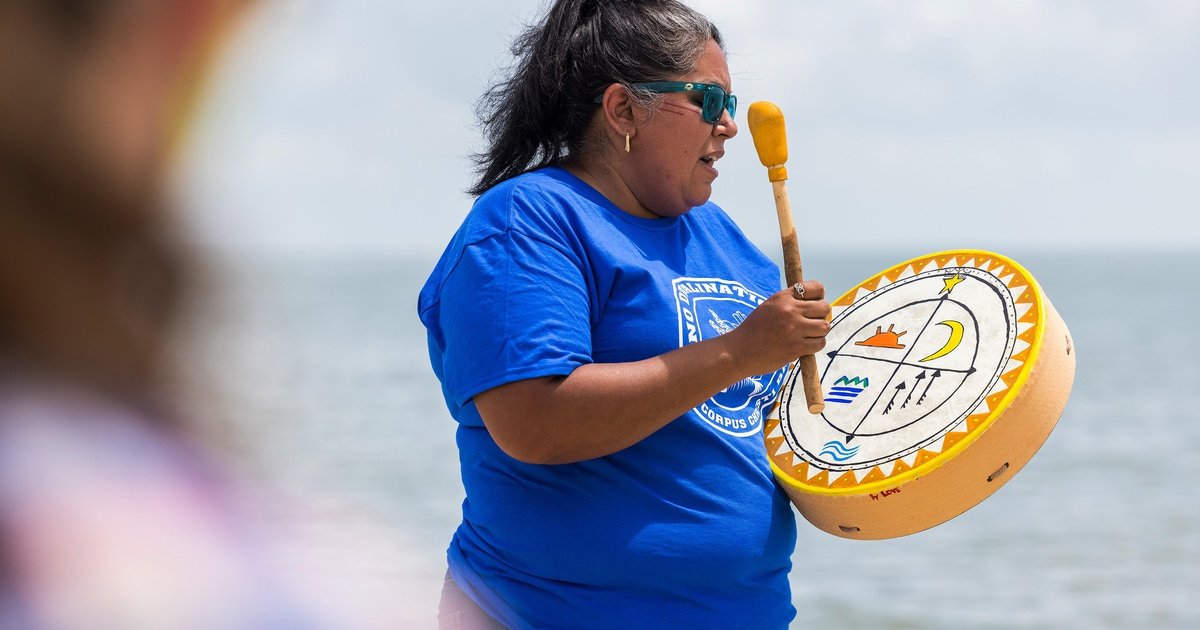 Historians long thought the Karankawa people had disappeared. But now a group of descendants is fighting to protect a coastal area — where thousands of Karankawa artifacts were found — from an encroaching oil export facility.

CORPUS CHRISTI — On the sandy shore of the Gulf, a small group formed a circle and began to sing through the August heat. Some played ceremonial drums, and two others held a large painted canvas that read, “SAVE CORPUS CHRISTI BAY.”

Of the dozen people who prayed, sang and spoke in the circle that day, three women were representing a people that most Texas history books claim are extinct.

They’re part of a small but growing group of Indigenous people who call themselves Karankawa Kadla — “kadla” means culturally mixed, and Karankawa is the name of a people who, for several centuries, controlled a more than 300-mile stretch of the Gulf Coast shore from approximately present-day Galveston Bay south to Corpus Christi Bay.

After finding one another through social media and the internet, they’ve come together just as an oil company is moving to expand its facility on a patch of coastal land in an area where their ancestors lived — and where thousands of Karankawa artifacts still lie. The result is a new fight in the old battle to defend their history, customs and land.

“It’s an emotional journey, what we’re going through,” said Sanchez, a 37-year-old woman who grew up in Corpus Christi and co-founded a nonprofit group, the Indigenous Peoples of the Coastal Bend.

Unlike some Native American tribes, the Karankawa Kadla don’t have tribal lands, treaties, or an official recognition from the state or federal government. They are surrounded by the dominant narrative that they don’t exist, a fog so thick and so potent that until relatively recently, some of them believed that they and their immediate family were the last Karankawa descendants.

Like many others who claim Karankawa ancestry, Sanchez has had to piece together her identity through family oral history. A long history of intense persecution by the Spanish, Anglo Texans and Mexicans forced many Karankawa people to go into hiding, assimilate with Mexican or American culture, or flee to survive.

Sanchez, for example, knows from her great grandmother that her ancestors were at the Spanish mission Nuestra Señora de la Bahía del Espíritu Santo de Zúñiga in Goliad, which was established to convert Karankawa people to Christianity in the 1700s. She is also, according to family oral history, descended from the Lipan Apache.

“We have our oral history, what we have passed down through our family, which is valid,” she said. “People went into hiding and intermarried because they didn’t want to go extinct.”

Some families are certain they are Karankawa and say their history and culture have been diligently passed down from generation to generation. But most have to piece together their heritage from family oral history, DNA tests and what little documentation exists in historical archives, such as those from Spanish missions.

The Karankawa Kadla community — more than 100 people who have connected through a Facebook group and a smaller council that leads community organization — is now fighting to protect a stretch of undeveloped land that juts into the east side of Corpus Christi Bay, sandwiched between a residential community and an oil company’s export terminal.

The area was once a bustling village where hundreds of Karankawa people gathered each year during the cooler months to live and fish. Those ancestors left behind tens of thousands of pottery sherds, arrowheads, tools fashioned from shells, and more.

Fifteen years ago, one of the state’s most respected archaeologists said that one stabled sand dune in the area called McGloin’s Bluff contained so many important artifacts that it was eligible for the National Register of Historic Places — a designation that would have protected the dune from development.