Gulf of Mexico
The Location and Watersheds of Addicks and Barker Reservoirs in Western Harris County. Source: Graphic by Christina Walsh for Jim Blackburn. 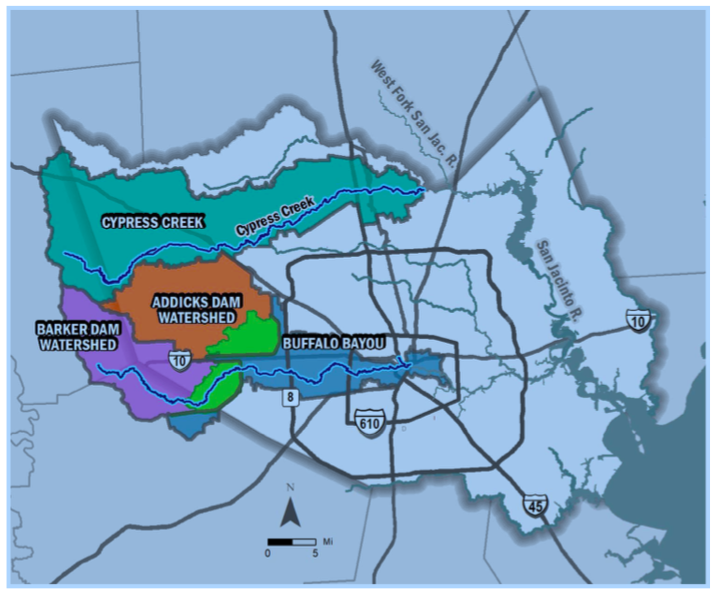 The storms of the recent past are unprecedented, and our methodologies for predicting and using information about storms of the future are inadequate to the extent they exist at all.

Hurricane Harvey came ashore on August 25, 2017, and Houston and Harris County will never be the same after experiencing 48 inches of rain over four days. According to 20th century statistics, Harvey was perhaps a 50,000-year storm (meaning there was a one-in- 50,000 chance of it occurring), yet we know this to be untrue in the 21st century, as flooding and extreme weather events are happening more often than probability predicts. We are not sure yet how to make sense of climate change, but we know our climate is changing. Such is the reality and the uncertainty upon which the future of Houston, relative to flooding, will be determined.

From the outset, it is important to note that many of our problems are self-inflicted. As Houston has expanded in almost all directions, we covered hundreds of thousands of acres with concrete and highly efficient drainage where there was previously very little. We converted natural sponges like the Katy Prairie above the Addicks and Barker Reservoirs and in upper Brays Bayou and upper White Oak Bayou and made them impermeable, generating much greater runoff than before. This increased runoff contributes to flooding in almost all our bayous. For decades we did not give this flooding problem the attention it deserved, but these problems cannot be ignored any longer. Our past mistakes, combined with a changing climate, have created our current flooding problem, and it is substantial.

One the one hand, there is much that is positive that has occurred since Hurricane/Tropical Storm Harvey flooded most of the Texas coast from the Louisiana border south to Corpus Christi. Harris County passed a $2.5 billion bond issue dedicated to flood abatement and drainage improvement. The federal government authorized four major channelization projects from the U.S. Army Corps of Engineers. Congress allocated over $2 billion for housing assistance to Harris County and the city of Houston. Work is unfolding on flood protection projects at an unprecedented rate. Positive actions indeed have occurred since over 160,000 homes were flooded during Hurricane Harvey.

Despite this progress, however, major concerns remain. In this paper, three major Harris County problem areas are discussed that exemplify the types of issues that make addressing flooding in Houston so difficult. These problem areas are (1) the difficulty in addressing flooding both above and below the Addicks and Barker Reservoirs, (2) the difficulty of relieving flooding in the low-income areas of northeast Houston/Harris County, and (3) the difficulty of protecting the Houston Ship Channel industries and residential, commercial, and industrial development on the east side of Houston. But, before addressing each of these specific areas, the issue of climate change and increasing storm intensity will be addressed.

The storms of the recent past are unprecedented, and our methodologies for predicting and using information about storms of the future are inadequate to the extent they exist at all. There are two types of flooding to consider. The first is rainfall flooding from either a tropical system or from the passage of a frontal system. The second is flooding from a storm surge, which is related to hurricanes coming ashore. The former could occur almost anywhere, and the latter is restricted to the coastal areas. They are both important, but a storm surge is more likely to cause massive loss of life and extensive environmental contamination along the Texas coast as well as impairment of our regional and national economy.

The rainfall flooding issue is summarized by the information presented in Figure 1. Prior to Hurricane/Tropical Storm Harvey, the 100-year and 500-year storm events for Harris County for a 24-hour time period were 13.2 and 18.9 inches of rainfall, respectively. After Harvey, the National Oceanic and Atmospheric Administration (NOAA) issued the NOAA Atlas 14, which provided an update of the rainfall statistics current through Harvey and the end of 2017. This document changed the 100-year and 500-year rainfall for Harris County to 17 and 25.4 inches for a 24-hour time period, respectively. This was significant, representing a 29% increase in the 100-year rainfall and a 34% increase in the 500-year rainfall. Despite this, scientists remain concerned that this increase was not large enough.

The question is, are the proposed 100-year and 500-year storms from NOAA Atlas 14 large enough? Each of the five storms shown on this chart exceeded the NOAA Atlas 14’s 100- year rainfall, and two exceeded the 500-year rainfall amount. A study by Kerry Emmanuel of the Massachusetts Institute of Technology after Hurricane Harvey suggests that a 20+ inch rainfall event might have a recurrence interval once every five-and-a-half years by 2100. This is quite concerning, as a 20+ inch rainfall under NOAA Atlas 14’s reconsideration is between a 100-year and 500-year event.

This new rainfall information raises several concerns. First, the current official 100-year floodplain for Harris County is still based upon 13 inches in 24 hours, which is obsolete yet still considered “official.” Both Harris County and the city of Houston have changed their regulations to require the use of the current 500-year event, which is a definite improvement, but state and federal agencies still use the current, obsolete 100-year floodplain for designing roads and other infrastructure elements and for pollution control programs, such as siting or protecting hazardous facilities located in the 100-year floodplain. The failure of the state and federal governments to make these adjustments is irresponsible and dangerous and should be addressed as soon as possible.

Secondly, as a region, state, and nation, we must begin to integrate these new rainfall projections into our flood-infrastructure thinking. As will be discussed in this paper, our current methodologies restrict our problem-solving ability by putting us in a box defined by past rainfall data. We must think outside of this box to solve the problems that are facing us today.

A similar problem exists with surge flooding. The Gulf Coast—from Freeport, Texas to Mobile, Alabama—is particularly susceptible to hurricane surge flooding due to the extent of the outer continental shelf that will cause an increase in surge flooding as storms move ashore. The concern is that relying only upon historic patterns and surge levels will lead to an underestimation of hurricane surges across the Gulf Coast and the East Coast of the United States.

Although the number of hurricanes appears to remain constant, multiple sources agree that hurricanes are getting larger. Category 4 and 5 storms are becoming more abundant, with the rate of increase reported to be 25% to 30% for each one-degree centigrade increase in temperature.2 Another source indicates that the number of Category 4 and 5 storms may double by 2100.3 These storms are also intensifying very rapidly as seen with Harvey (2017), Irma (2017), Maria (2017), and Laura (2020), to name a few. The destruction that could be brought by a Category 5 surge of 25 feet or more up the Houston Ship Channel would be horrifying, not to mention the environmental damage and loss of life it would incur.

This material may be quoted or reproduced without prior permission, provided appropriate credit is given to the author and Rice University’s Baker Institute for Public Policy.

Wherever feasible, papers are reviewed by outside experts before they are released. However, the research and views expressed in this paper are those of the individual researcher(s) and do not necessarily represent the views of the Baker Institute.