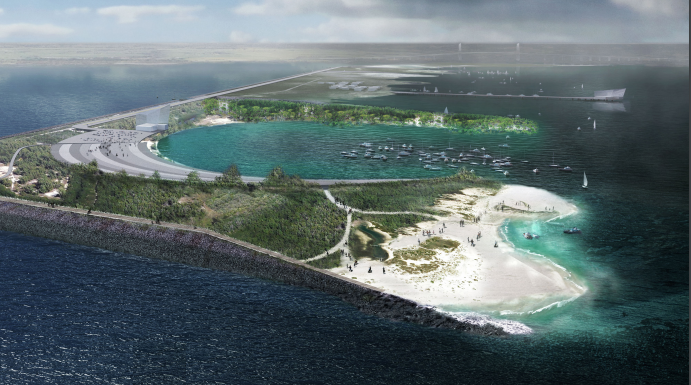 A plan that aims to protect critical economic infrastructure in the Houston and Galveston Bay region is moving forward.

According to the Houston Business Journal, Houston City Council authorized an agreement between the city and Rice University to advance the study of the proposed Galveston Bay Park Plan (GBBP), a flood surge protection system.

Rice University’s Severe Storm Prediction, Education, and Evacuation from Disasters (SSPEED) Center has been working on the plan since 2015 and it’s being designed in collaboration with the recently approved Coastal Spine project. The plan would create a new string of barrier islands to provide flood and surge protection to the region and improve operational safety for the Houston Ship Channel. It would also improve fish and wildlife habitats, could include marinas for recreational boats and would serve as a recreational park space that could feature horse trails, bike trails, an event center with amphitheater seating, a floating stage, and more. The SSPEED Center estimates the barrier portion of the GBBP could cost between $4 billion to $6 billion and could be completed between 2027 and 2030.

According to the SSPEED Center, scientific models show our region is overdue for a major hurricane and the “convergence of high category storms, sea level rise, and coastal development patterns” are creating significant risks. Their models show that a hypothetical Category 4 storm could result in a “new record-setting environmental disaster” due to the chemical storage tanks and petrochemical facilities and the “entire nation could be crippled by such a direct hit to the ship channel.”

The latest agreement appropriates funds toward the $1 million research project and will allow SSPEED to move forward with studies examining five key elements, including investigating financing options for construction costs; determining whether the excess material generated by widening and dredging in the ship channel can be used to build the barrier islands; and identifying key environmental concerns and potential mitigation steps for oyster beds and water quality.

The Texas House and Senate released their proposed budgetswhich includes $300 million to the Gulf Coast Protection District (GCPD) to provide a state match for the Coastal Spine. The state funding is expected to cover the 35% federal match necessary to begin construction on the project.