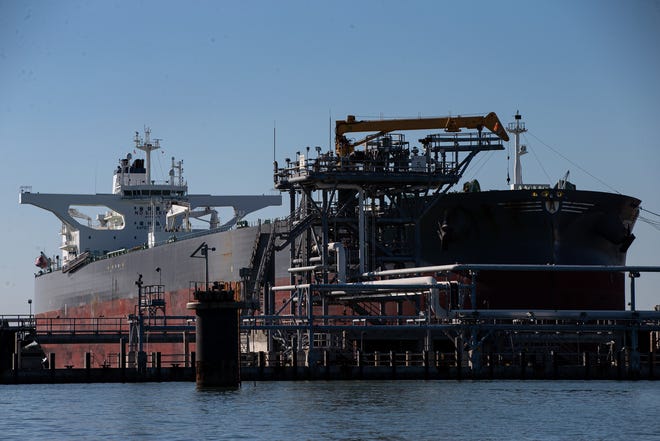 The spill originated from a pipe failure at Flint Hills Resources’ Ingleside crude oil terminal. The company estimates that 335 barrels, or 14,000 gallons, leaked into Corpus Christi and Nueces bays.

The multi-agency cleanup and recovery effort in response to an oil spill into Corpus Christi Bay is “largely complete” but will remain ongoing as crude is reported, according to officials and a Wednesday news release from Flint Hills Resources.

The spill, first reported on Dec. 24, originated from a pipe failure at Flint Hills Resources’ Ingleside crude oil terminal and was initially estimated to be 90 barrels, or 3,800 gallons, of light crude. Days later, after further analysis, the Koch Industries-owned company expanded its estimation to 335 barrels, or 14,000 gallons.

No “significant material or addressable sheen” has been confirmed since Tuesday, according to the company’s news release. Light crude takes on a unique appearance and may resemble yellow “popcorn” or appear to be a small pebble of paraffin or wax.

Thirteen birds have died due to exposure to crude oil since the event occurred, according to the statement. One turtle was treated for potential exposure to the spill, said Lt. j.g. James Mahoney, assistant incident management chief of U.S. Coast Guard, Corpus Christi sector. One turtle was found dead, but officials believe it died as a result of being cold-stunned.

The response, which has included the use of foot patrols, boats, drones, airplanes and helicopters, has largely centered on areas around North Beach, where the most crude has appeared and been recovered since the spill, Mahoney said.

Once the cleanup nears completion, both the Coast Guard and the Texas General Land Office, with assistance from Flint Hills Resources, will conduct a joint investigation into how the spill occurred, Mahoney said, adding that the environmental impacts will continually be assessed by the Coast Guard, the Texas Department of Parks and Wildlife and NOAA Fisheries, part of the National Oceanic and Atmospheric Administration.

“There'll be ongoing meetings between all (agencies), especially as we see if any more wildlife is impacted. … Only time is going to tell with that this early in it,” he said. “It's hard to say if there's going to be an impact or not.”