Gulf of Mexico
Renderings show portions of the coastal barrier, which environmental groups fear could permanently alter the Gulf (Courtesy of U.S. Army Corps of Engineers) 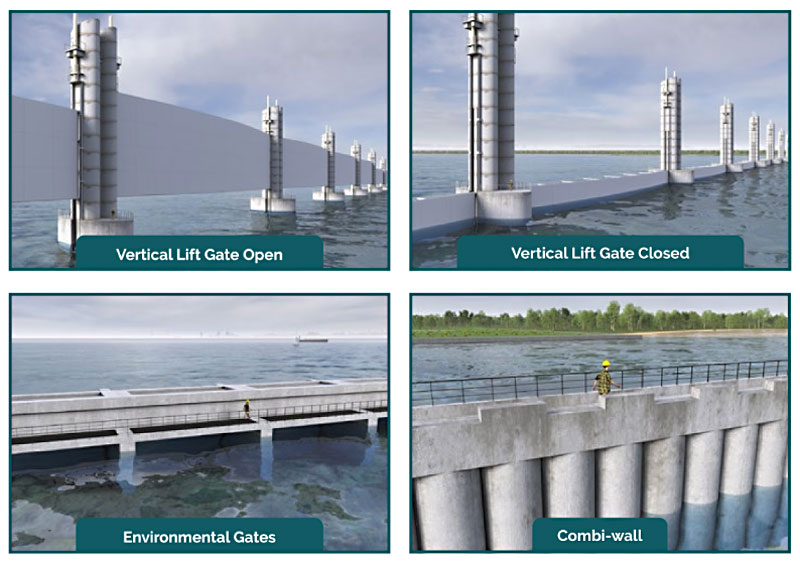 It should block storm surges, but it might also kill native species off

Environmental groups are ringing alarm bells as the U.S. Army Corps of Engineers proceeds with planning what could be the largest coastal barrier project in the United States. In early June, the U.S. House approved a bill that would let the Corps move ahead with the $31 billion project intended to protect hundreds of miles of the Texas coast from storm surges.

Congress' approval comes after a six-year $20.7 million study to assess the environmental impact of the proposed structure – the largest stretch of which is called the Ike Dike – but a crucial environmental impact report isn't complete. Environmental groups say that without further study, engineers can't guarantee that the barrier will be safe for coastal Texas species or even that it will protect the communities along the coast that will need protection most as climate change alters storm patterns. Professor Kelly Hara­gan at UT Law is working with these groups to review the Corps' analysis before the project moves forward. The Senate still needs to approve the project, which is part of the Water Resources Development Act. After the Senate approval, the Corps will still have to submit a separate request to Con­gress for federal funding. Then, local and state governments have to match the funding, which is expected to account for about 35% of the project's cost. After funding and approval, the project could take about 20 years to build.

Under the National Environmental Pol­icy Act, federal agencies such as the Army Corps of Engineers are legally required to submit an analysis of a project's environmental impact. In this case, the Corps decided to proceed with an unconventional but legal method of approval called "tier approval," in which the Corps looks at the broad impacts of the project and follows with a more detailed investigation later on, even after parts of the structure have been built, Haragan explained.

“This isn’t just about storm surge. We’re actually talking about the future of our coasts, and what we want this region to look like for future generations.” – Kristen Schlemmer, Legal Director of the Bayou City Waterkeeper

The problem, Haragan said, is that the Corps has already issued a Chief's Report, which means the project is ready to be authorized and receive funding from Congress. But the second tier of environmental impact statements hasn't been completed, and it would look at crucial impacts like how the barrier would affect salt levels in Galveston Bay and species migration. Haragan and environmental groups including the National Wildlife Foundation, Galves­ton Bay Foundation, Bayou City Water­keep­er, Turtle Island Restoration Net­work, and Healthy Gulf say that those impacts need to be evaluated before seeking funding for the project.

The Chronicle reached out to the Corps, but they declined comment, saying they were not giving interviews until the project is fully authorized and funded by Congress.

"We're not actually opposed" to the project, said Bob Stokes, president of the Gal­veston Bay Foundation. "Our position really is that we don't know the environ­ment­al impacts. We can't support it until we know the environmental impacts."

The floodgates, for example, that the Corps has proposed to build between Galves­ton Bay and the Gulf of Mexico will change the tide in the bay. Even when the gates are fully open, they are expected to restrict water flow by about 8.4%, according to the Corps. Wetlands that grow in specific water elevation ranges are expected to die. Although the Corps has identified that wetlands will be impacted, they have not quantified the effect.