Gulf of Mexico
An oily sheen was visible in March after two vessels collided in the Ship Channel.Smiley N. Pool/Staff 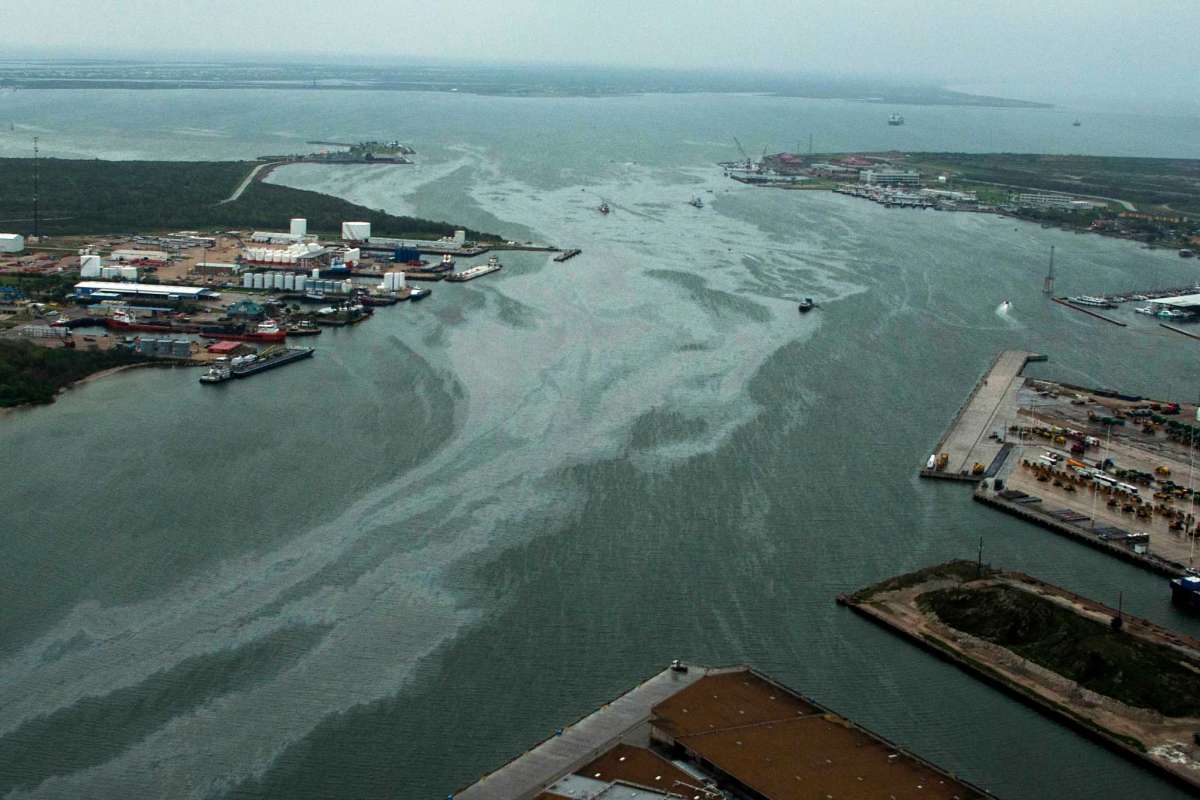 MARCH 22, 2014: Capt. Kelli Ann Hartman was steering the tugboat Miss Susan as it pushed two barges filled with heavy fuel oil. Pilot Michael Pizzitola was in charge of the bulk carrier Summer Wind when it collided with one of the barges at about 12:35 p.m., dumping about 168,000 gallons of oil into the water.

Houston, Texas-based Kirby Inland Marine LP has agreed to pay $15.3 million in damages and assessment costs under the Oil Pollution Act to resolve federal and state claims for injuries to natural resources resulting from an oil spill from a Kirby barge, after a collision Kirby caused.

The United States and Texas concurrently filed a civil complaint along with a proposed consent decree. The complaint seeks money damages and costs under the Oil Pollution Act for injuries to natural resources resulting from Kirby’s March 2014 discharge of approximately 4,000 barrels (168,000 gallons) of oil from one of its barges into the Houston Ship Channel at the Texas City “Y” crossing. The complaint alleges that the spill resulted from a collision that occurred while a Kirby towboat, the Miss Susan, attempted to push two 300-foot-long oil barges across the Houston Ship Channel in front of the oncoming M/V Summer Wind, a 585-foot-long deep-draft bulk cargo ship that was already underway in the Channel.

The oil flowed from the Houston Ship Channel into Galveston Bay and the Gulf of Mexico, polluting waters and washing onshore from the collision site down to Padre Island National Seashore near Corpus Christi. The oil spill caused significant impacts and injuries to the Texas coastline including the wildlife refuge on Matagorda Island, and to aquatic and terrestrial habitats, as well as to dolphins and migratory birds. The oil spill also forced the closure of the Houston Ship Channel and disrupted recreational uses of the Texas coastline, resulting in lost recreational opportunities from Galveston-area beaches to beaches as far south as Padre Island National Seashore. Kirby, the Coast Guard, and the State were involved in extensive response and cleanup efforts, and Kirby has cooperated in the assessment of injuries to natural resources.

“All oil transporters must take care to operate safely and prevent spills into our nation’s waters,” said Assistant Attorney General Todd Kim for the Justice Department’s Environment and Natural Resources Division. “This case illustrates that the stakes are high, the harms are serious, and the United States and its state partners will diligently pursue and secure compensation for injuries to natural resources resulting from oil spills.”

“We are pleased to join our co-trustees to restore vital habitats, dolphins, birds and recreational areas injured by this oil spill,” said Director Nicole LeBoeuf of National Oceanic and Atmospheric Administration (NOAA)’s National Ocean Service. “Local communities and economies depend on resilient coastal ecosystems, and we look forward to working with the public on projects to restore them.”

“The Texas City Y oil spill impacted shoreline and marsh habitat on Matagorda Island, which is part of the Aransas National Wildlife Refuge,” said Amy Lueders, the Service’s Southwest Regional Director. “This settlement will provide for restoration of these injured resources as well as helping to recover shorebirds and other birds and their habitats impacted by the oil and cleanup activities.”

Under the proposed consent decree, Kirby will pay $15.3 million as natural resource damages for the spill, which the federal and State trustees will jointly use to plan, design and perform projects to restore or ameliorate the impacts to dolphins and other aquatic life, birds, beaches, marshes, and recreational uses along the Texas coast. Kirby also has been paying the federal and State trustees for their assessment work and will reimburse the last remaining unpaid costs, as required under the Oil Pollution Act.

Today’s action was filed by the Department of Justice and the Office of the Texas Attorney General on behalf of the federal and State trustees for natural resources. The designated federal trustees for the natural resources impacted by Kirby’s oil spill are the U.S. Department of Commerce through the NOAA and the U.S. Department of the Interior through the U.S. Fish and Wildlife Service and the National Park Service. The designated State trustees are the Texas General Land Office, the Texas Commission on Environmental Quality, and the Texas Parks and Wildlife Department. The federal and State trustees have worked together to perform their injury assessment work and are engaged in joint restoration planning efforts.

In a related Clean Water Act enforcement action in 2016, the United States on behalf of the Coast Guard secured a settlement with Kirby for $4.9 million in civil penalties and injunctive relief measures to improve the company’s operations to help prevent future spills.

The proposed consent decree is subject to a 30-day public comment period and court review and approval. A copy of the consent decree is available on the Department of Justice website at www.justice.gov/enrd/Consent_Decrees.html.