Gulf of Mexico
Detail of a warning sign near the Point Comfort Formosa plant. The waterways near the plant are polluted by numerous industrial facilities in the area. 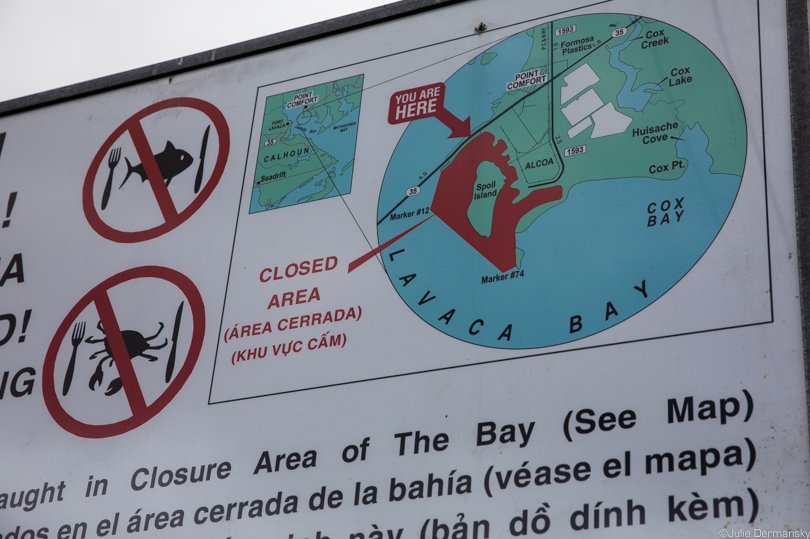 On the afternoon of January 15, activist Diane Wilson kicked off a San Antonio Estuary Waterkeeper meeting on the side of the road across from a Formosa plastics manufacturing plant in Point Comfort, Texas. After Wilson and the waterkeeper successfully sued Formosa, the company agreed to no longer release even one of the tiny plastic pellets known as nurdles into the region’s waterways.

The group of volunteers had assembled that day to check whether the plant was still discharging these raw materials of plastics manufacturing.

Their suit against Formosa Plastics Corp. USA resulted in a $50-million-dollar settlement and a range of conditions in an agreement known as a consent decree. Key among the conditions was the company’s promise to halt releasing the nurdles it manufactures into local waterways leading to the Texas Gulf Coast by January 15.

Wilson described the occasion as “day one of the zero discharge settlement.” As of that date, Formosa could be fined up to $15,000 a day if it were found still discharging nurdles. That would put the multi-billion-dollar plastics maker in violation of the court settlement made after U.S. District Judge Kenneth Hoyt determined the company had violated the Clean Water Act by discharging plastic pellets and PVC powder into Lavaca Bay and Cox Creek in a June 27 ruling last year.

The deal, signed by Judge Hoyt in December, represents the U.S.’s largest settlement in a Clean Water Act lawsuit brought by private individuals against an industrial polluter. The settlement mandates that both Formosa and the plaintiffs agree to a monitor, remediation consultant, engineer, and trustee for ongoing monitoring of the plant.

After calling the group’s meeting to order, Wilson gave an update on how requirements of the consent decree were progressing. The volunteer team of nurdle monitors, who have been collecting nurdles discharged by the plant for the last four years, listened eagerly. Wilson said that Formosa had missed the January 15 deadline to deliver the waivers they needed to sign, which would grant them permission to monitor on the company’s property along the fence line. Without the signed forms, the group put off their on-the-ground monitoring trip. Instead, they headed for the banks of Cox Creek, where Wilson set off in a kayak to check on one of the plant’s outfalls.