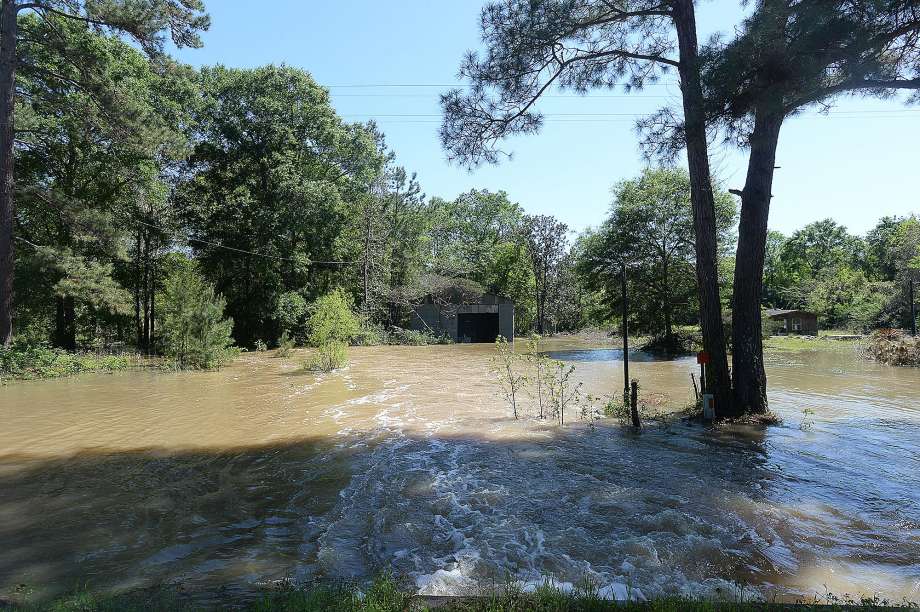 Flood waters from a ditch running under FM 1416 in Newton County rush onto an abandoned property in Newton County Friday. Many residents of a Bon Wier neighborhood known as "The Hole" evacuated Thursday as rising waters quickly flooded the area, nearing entry levels at some elevated homes. Heavy rainfall and the opening of the dams at Toledo Bend have swelled the Sabine River, area creeks and ditches and is expected to rise further through the weekend. Photo taken Friday, March 30, 2018 Kim Brent/The Enterprise

A comprehensive study of Southeast Texas’ three watersheds may ultimately be folded into a broader survey of Texas’ three major coastal river basins being pursued by the Texas General Land Office — nationally, one of the largest undertakings of its kind.

At the same time, eight counties in Southeast Texas are creating a local government corporation with a first priority to commission a study of the Trinity-Sabine-Neches rivers watershed, part of which Jefferson County Judge Jeff Branick said will be funded by federal dollars he believes already have been earmarked for the project.

Largely because of funding constraints, watersheds generally are studied by various government agencies in small pieces, spurred by interest in a specific project. Once the projects are completed, the data collected are stored on a bookshelf somewhere and likely not used again, General Land Office spokeswoman Brittany Eck said.

“Many people who worked in disaster recovery have longed for the opportunity to do more,” she said. But the money hasn’t been there.

“The trouble was, we had to go to (the U.S. Department of Housing and Urban Development, which is overseeing the General Land Office’s distribution of Harvey disaster recovery funds) and explain that something that happens upstream affects downstream,” Eck said. “We told them we need to be able to study all of that and they agreed.”

Qualifications from parties interested in conducting the Land Office’s study are due in early February. The whole process is expected to take about two years, Eck said.

The chosen engineering firm, college or some grouping of representatives from both will be expected to map and study all the way back to the origins of the tributaries and river basins in the Nueces-San Antonio-Guadalupe-Lavaca-Colorado, Brazos-San Jacinto-Houston Bayou and Trinity-Sabine-Neches watersheds.