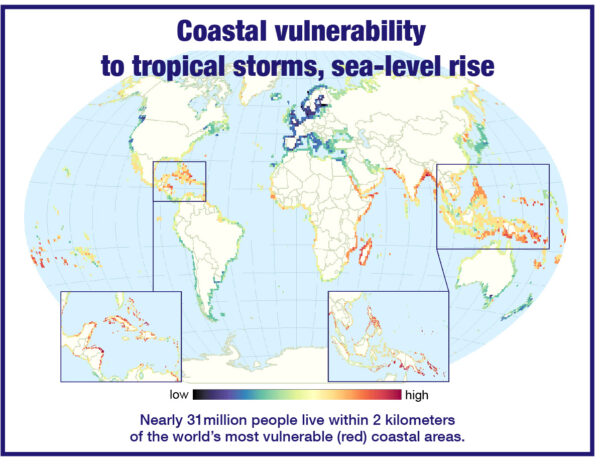 A new study finds that about 31 million people worldwide live in coastal regions that are “highly vulnerable” to future tropical storms and sea-level rise driven by climate change. But in some of those regions, powerful defenses are located just offshore.

Of those 31 million people, about 8.5 million directly benefit from the severe weather-protection of mangroves and coral reefs, key buffers that could help cushion the blow against future tropical storms and rising waters, according to the study published May 29 in the peer-reviewed journal PLOS ONE.

Because the two “natural infrastructures” absorb wave energy, reduce wave heights and provide a host of other environmental benefits, the study findings underscore the need for worldwide conservation and restoration of these natural resources. A particular focus, the authors said, should be placed on the most vulnerable regions, which lack available resources for more expensive protective measures, such as construction of levees or sea walls.