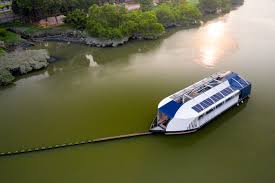 The Ocean Cleanup's 'Interceptor' Aims to Clean 1,000 Rivers in 5 Years. Will It Work?

It had rained all morning across Jakarta on the first Tuesday in February. The rivers in the Indonesian capital quickly filled up, carrying all kinds of debris toward the Java Sea. In one of the city's largest waterways, a Dutch-made device was trapping some of the trash to prevent it from washing out into the ocean.

The Interceptor 001 had been shipped to Jakarta in early 2019 by its inventor, the Rotterdam, Netherlands-based nonprofit organization The Ocean Cleanup (TOC). The prototype has been on a trial run since May 2019 near the mouth of the Cengkareng drain, which connects the city's notoriously garbage-laden Angke River to the Java Sea.

Jakarta's prototype is the first generation of a device that TOC aims to deploy in 1,000 of the world's most polluted rivers in just five years. The organization estimates these waterways are responsible for carrying 80 percent of ocean trash out to sea, with the remaining 20 percent of marine trash coming from around 30,000 other rivers.

There are two Interceptors currently installed, the second on the Klang River in Kuala Lumpur, Malaysia. According to Chris Worp, TOC's managing director, the group plans to deploy another Interceptor to the Rio Ozama in the Dominican Republic this month, and a fourth to southern Vietnam.