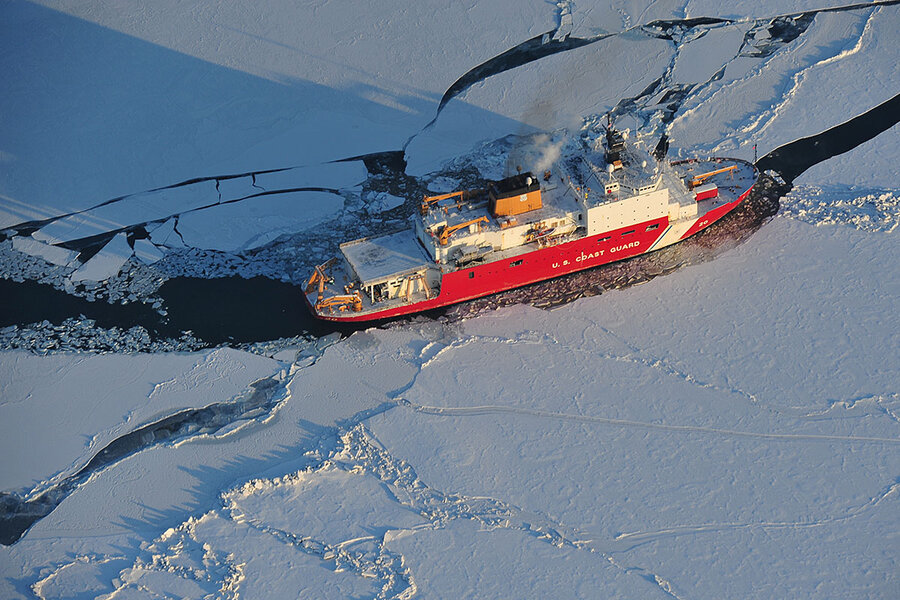 Arctic - The Northwest Passage is thawing. Will US, Canada sail its waters together?

Steering the ship from her perch 93 feet above the Arctic waterline, U.S. Coast Guard Ensign Valerie Hines guides the vessel through ice cover laid out like a vast white puzzle starting to tear apart.

She nudges the 420-foot U.S. Coast Guard cutter Healy forward – ramming, then backing up and ramming again, the ice that is several feet thick. The noise is deafening as cleaved chunks scrape the side of the hull. Below deck, the constant vibration caused by the severing sheet can feel like an earthquake.

Yet the bulldozing task here has its moments of beauty, too: Some of the ice chunks peeling away from the bow glow with an iridescent blue, as if being lit by a flashlight from underneath the sea.

WHY WE WROTE THIS

With the melting Arctic opening up new opportunities and stirring old rivalries, the U.S. and Canada are trying a cooperative approach to tapping the thawing resources and trade routes. Part one of two.

The ship’s journey is part of a rare transit through the fabled Northwest Passage that is helping the U.S. project influence in what is one of the most geostrategic – and quickly changing – places on Earth.

With a warming Arctic and polar ice cap in retreat, the rooftop of the world is more navigable than at any time in modern history. And that is opening up the potential for new commercial lanes and the need for better search and rescue expertise, enhanced environmental protection, and cooperation with local populations in the high latitudes. It has also set off a global race to lay claim to routes and resources in the austere but all-important region.

Ensign Valerie Hines pilots the U.S. Coast Guard cutter Healy through the ice during its Northwest Passage transit, Sept. 2, 2021. “One of the things I’ve learned is just how much patience icebreaking requires,” says Ensign Hines.

“They are pretty crazy pieces of ice,” says Ensign Hines. “They would roll down the side of the hull and you would see them flip over on their side, back behind us. It’s definitely a multisensory experience.”

But, first, Ensign Hines has to actually get the Healy through the entombed tundra. It’s the ship’s third journey across the Northwest Passage. Ensign Hines says piloting the bull-nosed boat through the ice field takes composure and problem-solving: deciding when and how far to veer off a particular path, sometimes weaving and sometimes turning sharply through a multiyear ice field. Other times the best option is simply to batter ahead.

“One of the things I’ve learned is just how much patience icebreaking requires,” says Ensign Hines.

No ice to stand on

That knowledge is one of the main points of this voyage through the Northwest Passage, which was first traversed by a Norwegian explorer, Roald Amundsen, in 1906. Since Mr. Amundsen’s first voyage, only 318 vessels, as of 2020, have successfully crossed it.