Coastwide
Sampling at a 6-year-old plough track in the DISCOL-area. Credit: ROV-Team/GEOMAR 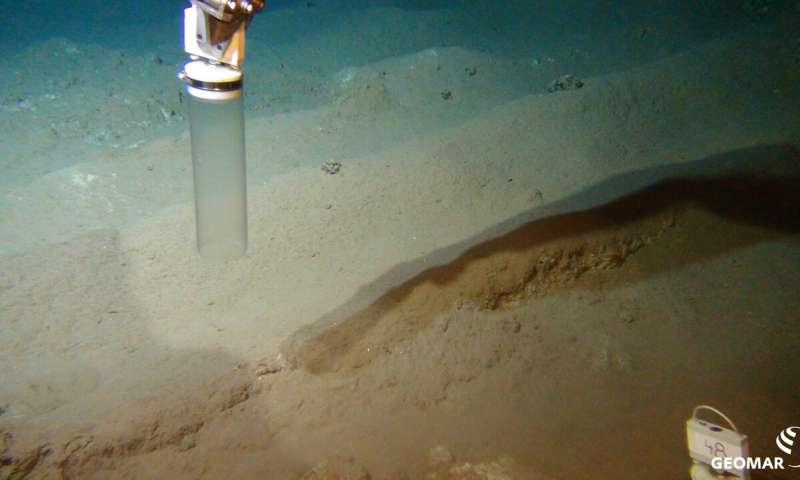 The environmental impact of deep-sea mining is only partially known. Also, there is a lack of standards to regulate mining and set binding thresholds for the impact on the local organisms. Researchers at the Max Planck Institute for Marine Microbiology with colleagues at the Alfred Wegener Institute, the GEOMAR and others describe that deep-sea mining-related disturbances have a long-term impact on the natural ecosystem functions and microbial communities at the seafloor.

Polymetallic nodules and crusts cover many thousands of square kilometers of the world's deep-sea floor. They contain mainly manganese and iron, but also the valuable metals nickel, cobalt and copper as well as some of the high-tech metals of the rare earths. Since these resources could become scarce on land in the future—for example, due to future needs for batteries, electromobility and digital technologies—marine deposits are economically very interesting. To date, there is no market-ready technology for deep-sea mining. However, it is already clear that interventions in the seabed have a massive and lasting impact on the affected areas. Studies have shown that many sessile inhabitants of the surface of the seafloor depend on the nodules as a substrate, and are still absent decades after a disturbance in the ecosystem. Also, effects on animals living in the seabed have been proven. As part of the BMBF-funded project MiningImpact, the Max Planck Institute in Bremen has now taken a closer look at the smallest seabed inhabitants and their performance.

What about the smallest inhabitants of the seafloor?

The present study shows that microorganisms inhabiting the seafloor would also be massively affected by deep-sea mining. The team led by Antje Boetius, group leader at the Max Planck Institute for Marine Microbiology and director at the Alfred Wegener Institute Helmholtz Centre for Polar and Marine Research, travelled to the so-called DISCOL area in the tropical East Pacific, about 3000 kilometers off the coast of Peru to investigate conditions of the seafloor as well as the activity of its microorganisms. Back in 1989, German researchers had simulated mining-related disturbances at this site by plowing the seabed in a manganese nodule area of three and a half kilometers in diameter with a plow-harrow, 4000 meters under the surface of the ocean.

"Even 26 years after this disturbance, the plow tracks on the seabed were still clearly visible," reports first author Tobias Vonnahme, who participated in the study as part of his diploma thesis. "And the bacterial inhabitants were also clearly affected."