International
Scientists retrieve the trawl net on the research vessel Walton Smith in the Florida Straits. Image by Heather Bracken-Grissom. 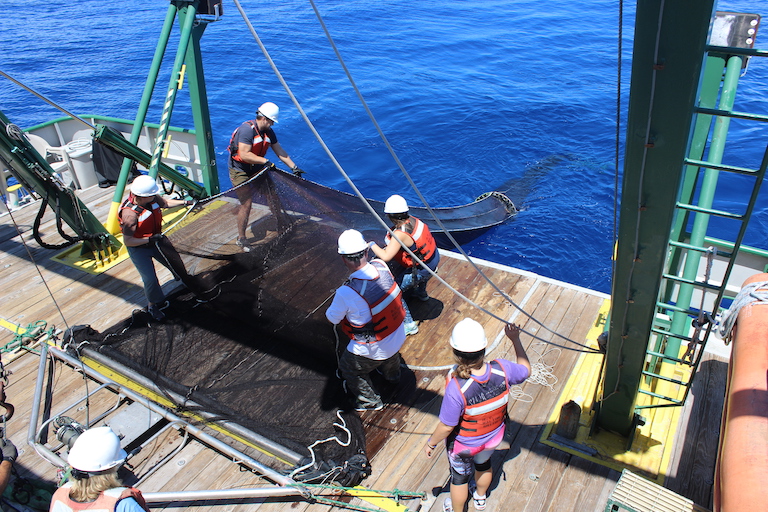 Shell of bioluminescent shrimp not only glows but detects light

Surrounded by darkness, many deep-sea creatures emit light to help find prey or avoid predators. Scientists have long known that small organs called photophores are responsible for this bioluminescence. Now they’ve learned that photophores can also detect light, acting like rudimentary eyes all over the body.

A team of marine biologists made the discovery by studying deep-sea shrimp in the Florida Straits. They published their findings in the journal Scientific Reports earlier this month. Their work adds to a growing body of research documenting photosensitive organs outside the eyes in a variety of animals, and is the first demonstration in deep-sea creatures.

“When we think about sensing light we think of the eyes,” Heather Bracken-Grissom, a marine biologist at Florida International University who led the study, told Mongabay. “These shrimp have the ability to see beyond their eyes, in a sense.”

Janicella spinicauda shrimp take part in one of the planet’s largest daily migrations — one that is not so much geographical as vertical. Every night, they rise from depths as great as 1,500 meters (almost 5,000 feet) to shallow waters to feed and mate. On the move, they camouflage themselves by glowing so that predators below can’t see their silhouettes against light from above. But it’s been unclear how they and other deep-sea animals that perform this trick can adjust the intensity of their glow to match that of the light emanating from above.