International
Location map of the south east Australia shelf (SEAS), including the paleoshorelines preserved in the present-day continental shelf, 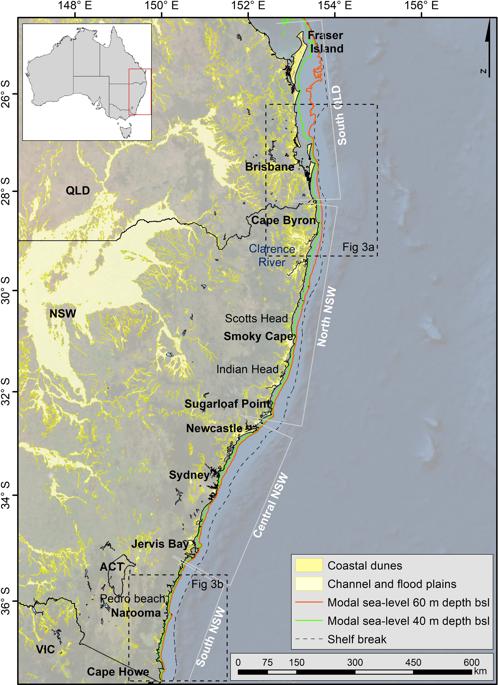 Our latest paper, led by Marta Ribó, is out today in Nature Scientific Reports. With this new research, we can now identify which sections of the East Australian coast are likely to have a future and ongoing sand supply sand which sections are inherently vulnerable to erosion due to a lack of sand supply thousands of years ago.

Submerged paloeshorelines preserved on the continental shelf indicate the depths of the most frequent (modal) low sea-levels within the glacial stages of the Late Quaternary. Here we have determined the south-east Australian shelf configuration when sea level was 40 m and 60 m below present-day sea-level (depths of the most persistent paleoshorelines within the last 120 ka), and we resolve the wave climate variations influencing the sediment transport pathways over this period. We present evidence demonstrating that the combination of shelf morphological evolution, changes in sea-level and variations in wave climate is responsible for latitudinal changes in sediment transport and deposition during the interglacial states. The paleoshoreline and shelf evolution is key to understanding the distribution of present-day shelf sand deposits and the contemporary sand budget response to future wave climate changes.

Long-term coastal evolution is notoriously difficult to resolve due to a poor understanding of the paleo-sediment dynamics involved; especially the changes in sediment transport paths and sediment supply rates, that are related to wave climate and sea-level variability. Coastal sediment dynamics is also influenced by wave climate variations and their impacts upon the shoreline geometry. On stable continental shelves, such as the south east Australia shelf (SEAS)1,2,3, preserved paleoshorelines register the depth at which sea-level persisted for millennia, during which the coastal processes formed depositional and erosional features (e.g., relict barriers, sand spits, shoreface ridges, etc.). Using the records of relative sea-level variations during the Late Quaternary, the most frequent low sea levels can be identified, which define the depth intervals on the shelf (i.e., modal depths) at which paleoshorelines are likely to occur4. On wave-dominated coasts, such as the SEAS, the steepness of the shelf is the primary influence on net onshore-offshore sediment budget changes over the long-term5,6. Depending on regional variations of shelf morphology and steepness, coastal processes will either be limited to the innermost portion of the shelf (e.g., south of 32°S, where the present-day shelf is relatively narrow and steep (>1°), and dominated by erosional processes) or will cover most of the shelf surface (e.g., north of 32°S, where present-day shelf is shallow and wide, and depositional process are dominant)7,8. Additionally, topographic features aligned normal to the coast (i.e., headlands and reefs) also play an important role in determining long-term sedimentation trends, by interrupting the northward drift of sediment at any position of sea-level lower than present.

Together with shelf configuration and margin orientation, modal wave climate is responsible for the long-term delivery of sediment across the shoreface and for the equilibrium shoreline planform orientation9,10. Variations in directional wave climate induce changes on the nearshore wave obliquity and alongshore wave energy flux, ultimately influencing the sign and magnitude of sediment transport and deposition11.

Here we present a comprehensive dataset for characterising SEAS morphology and determining paleoshoreline configuration when sea level was below the modal depth (Fig. 1). We use high-resolution bathymetric data (i.e. single and multibeam sonar, and aerial LiDAR) and legacy data from sediment samples collected at more than 30 sites (early 1980s to present day), to map the grain size distribution and location of reefs and shelf sand deposits along the SEAS (Fig. S1). This information is used together with a hindcast of orbitally forced directional wave climate throughout the glacial cycle, to resolve the connectivity and longshore sediment transport paths during the Late Quaternary glacial and interglacial cycles. The definition of paleo-sediment transport and relict sand bodies is essential data to apply to the projection of modern coastline response to net changes in wave climate, sediment transport and sea levels over the coming century.