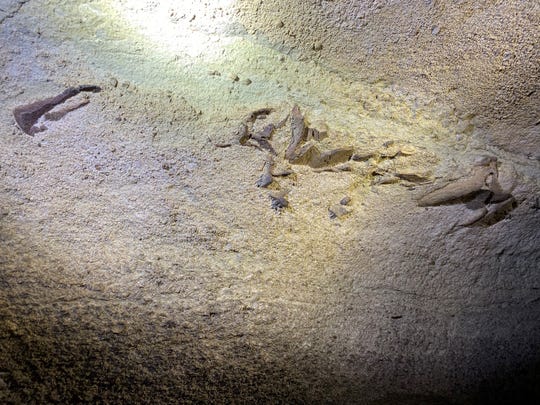 During a trip to Mammoth Cave National Park in November, paleontologist John-Paul Hodnett was stunned.

Preserved in the walls of the cave were parts of a large, fossilized shark head — from a shark that lived about 330 million years ago.

The discovery began when Mammoth Cave specialists Rick Olson and Rick Toomey came across the fossils as they explored and mapped the cave system. They sent photos to Vincent Santucci, the senior paleontologist for the National Park Service in Washington, D.C., for help identifying the fossils.

Santucci then sent Hodnett, a paleontologist and program coordinator at Dinosaur Park in Maryland, to help with what became the "Mammoth Cave National Park Fossil Shark Research Project."

You may like: A Kentucky biologist discovered a new species, and you could name it

Some of the shark fossils in the photos were identifiable, but Hodnett said what got him really excited was something else.

"One set of photos showed a number of shark teeth associated with large sections of fossilized cartilage, suggesting there might be a shark skeleton preserved in the cave," he said.

Fossils of shark skeletons are rare because cartilage does not typically survive fossilization. Shark teeth, however, are made of bone and enamel and preserve well. Since sharks replace their teeth throughout their lives, shark teeth are one of the most common fossils on the planet, Hodnett said.