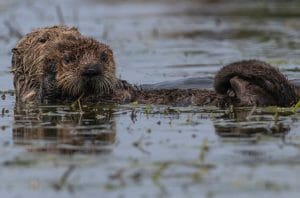 Sea Otters, Opossums and the Surprising Ways Pathogens Move From Land to Sea

A parasite known only to be hosted in North America by the Virginia opossum is infecting sea otters along the West Coast. A study from the University of California, Davis, elucidates the sometimes surprising and complex pathways infectious pathogens can move from land to sea to sea otter.

For the study, published in the journal Scientific Reports, researchers tested sea otters ranging from Southern California to Alaska for the presence of Sarcocystis neurona, a parasite and important cause of death in sea otters.

They were surprised to find several infected sea otters in the northern part of Vancouver Island in British Columbia, where Virginia opossums — also known as the North American opossum — are not known to live. They wondered: Could this parasite travel very long distances in water, or is there an additional unknown host for this pathogen?

To answer this question, the scientists examined spatial patterns and previous research into pathogen transmission, diet and movement of otters. Their results suggest the pathogen may be carried by water runoff from land to sea, where it can be concentrated through ocean movement and prey species, such as clams.