Coastwide
NUMBER OF ADDITIONAL INCOMING MIGRANTS IN THE 1.8 METER SEA-LEVEL RISE SCENARIO (VERSUS A BUSINESS-AS-USUAL SCENARIO) PER COUNTY AS A PERCENTAGE OF THAT COUNTY’S POPULATION. MAP/DILKINA AND ROBINSON. 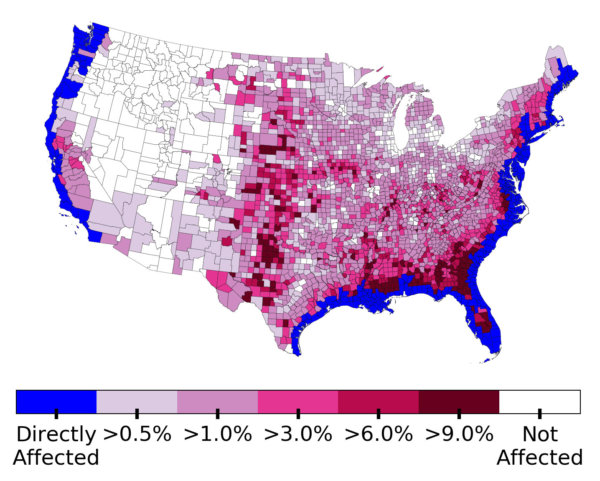 When Hurricane Harvey slammed into the Texas coast in 2017, displaced residents flocked inland, trying to rebuild their lives in the disaster’s aftermath. Within decades, the same thing could happen at a much larger scale due to rising sea levels, says a new study led by USC Computer Science Assistant Professor Bistra Dilkina.

The study, published in PLOS ONE, Jan. 22, is the first to use machine learning to project migration patterns resulting from sea-level rise. The researchers found the impact of rising oceans will ripple across the country, beyond coastal areas at risk of flooding, as affected people move inland.

In the US alone, 13 million people could be forced to relocate due to rising sea levels by 2100. As a result, cities throughout the country will grapple with new populations. Effects could include more competition for jobs, increased housing prices, and more pressure on infrastructure networks.