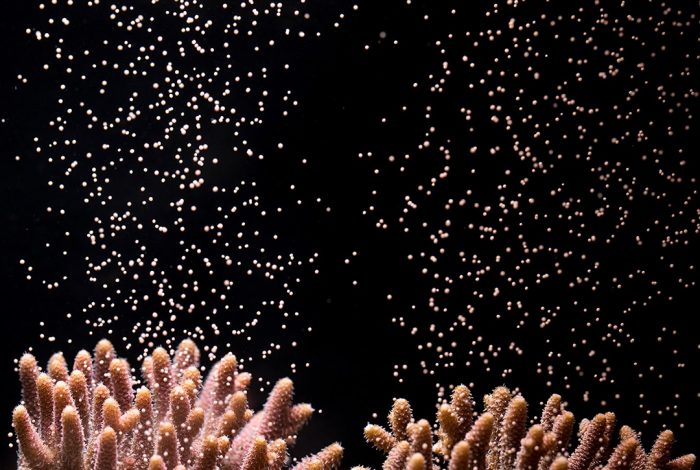 Scientist is saving corals by breeding them in the lab

Just off the coast of Singapore, a group of scientists huddles together in the warm ocean water as waves roll and crash around them.

By
Lana Cohen, Who What Why
Section:
Science
Region:
Coastwide
International

Clad in neoprene suits and goggles, with their nets out and jars poised, they wait for an event that happens just once a year. First there is just a flurry. Then the slow-motion underwater blizzard reaches a crescendo as the water fills with colors from cream to dark red to bright green.

Cued by the lunar cycle and ambient temperature, entire colonies of coral reefs release their tiny packages of eggs and sperm, called gametes, in unison in mass coral spawning events known as “broadcast spawning.” The gametes float to the surface of the ocean, and fertilization begins. This is how baby corals — which start out the size of the tip of a needle — are born and, ultimately, how coral reefs are made.

For some 15 years, biologist Jamie Craggs toyed with the idea of working with coral spawning. But he didn’t turn the thought into action until he had witnessed such an event in person. The experience catalyzed him to dive into the research he’s spearheading today.