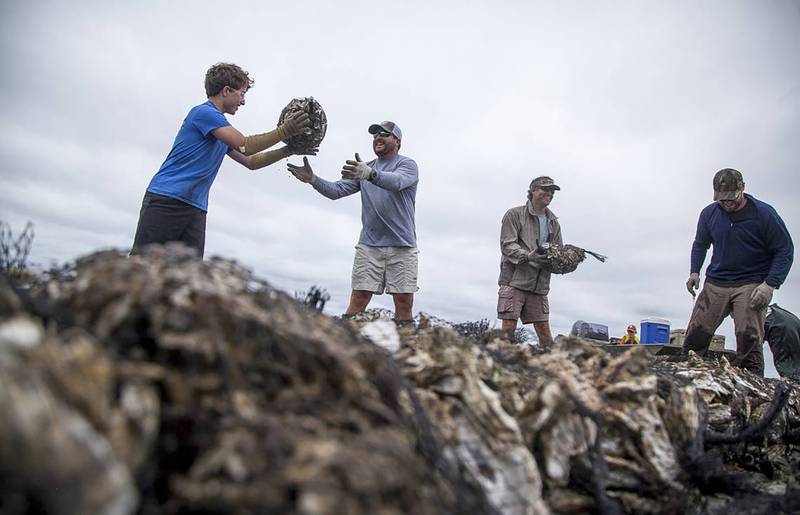 BEAUFORT, S.C. — Sitting atop the crow’s nest of a small barge, the boat captain shielded his eyes from the July sun and pitched his gaze to the commotion below.

The hum of heavy equipment and the clatter of oyster shells broke the morning’s silence as work crews piled thousands of pounds of dried shells on the deck, eventually creating a mound 12 feet high.

When the last shell had been placed on the pile, the captain maneuvered the barge away from Russ Point Landing and down a tidal creek near Fripp Island on a mission to save wild oysters.

The state-sponsored work was part of an effort to protect imperiled oyster populations by returning shells from restaurants, backyard oyster roasts and other sources to tidelands. Putting shells back in the mud rebuilds reefs, the refuges baby oysters need to grow and multiply.

But efforts to restore oyster reefs in places like Beaufort County face a threat that could affect virtually anyone who depends on the harvest of wild oysters.

At one time considered marine trash, oyster shells have become a valuable — but limited — commodity along the South Atlantic coast.

“This definitely is a multi-state, national problem: finding shell,’’ said Ben Dyar, an oyster specialist with the South Carolina Department of Natural Resources.

Without adequate supplies of shells, oyster populations could suffer, curtailing the commercial harvest and driving up the price of shellfish in restaurants. Fewer oyster reefs and lower populations could also mean more polluted waterways because oysters filter out contaminants in water.

There are multiple reasons for the shell shortage, including the toll that over-harvesting has taken through the years in South Atlantic states. But people also are throwing away the shells after serving oysters in seafood houses or at community oyster roasts. People are using shells to pave driveways and enhance gardens. And they’re crushing shells to sell for chicken feed or as ingredients in cosmetic products.

The shortage is so pronounced that some states have spent millions of dollars through the years purchasing shells to restore and rebuild oyster reefs — sometimes competing for the limited shells offered by shucking houses from Texas to Virginia.

Prices have increased from well under a dollar a bushel two decades ago to many times more than that today. The cost is now running from $3 to $7 a bushel, say some shucking house owners and state wildlife officials.

South Carolina, with vast marshes and hundreds of seafood restaurants, spends, on average, about $100,000 annually buying shells from other states, according to the South Carolina Department of Natural Resources.