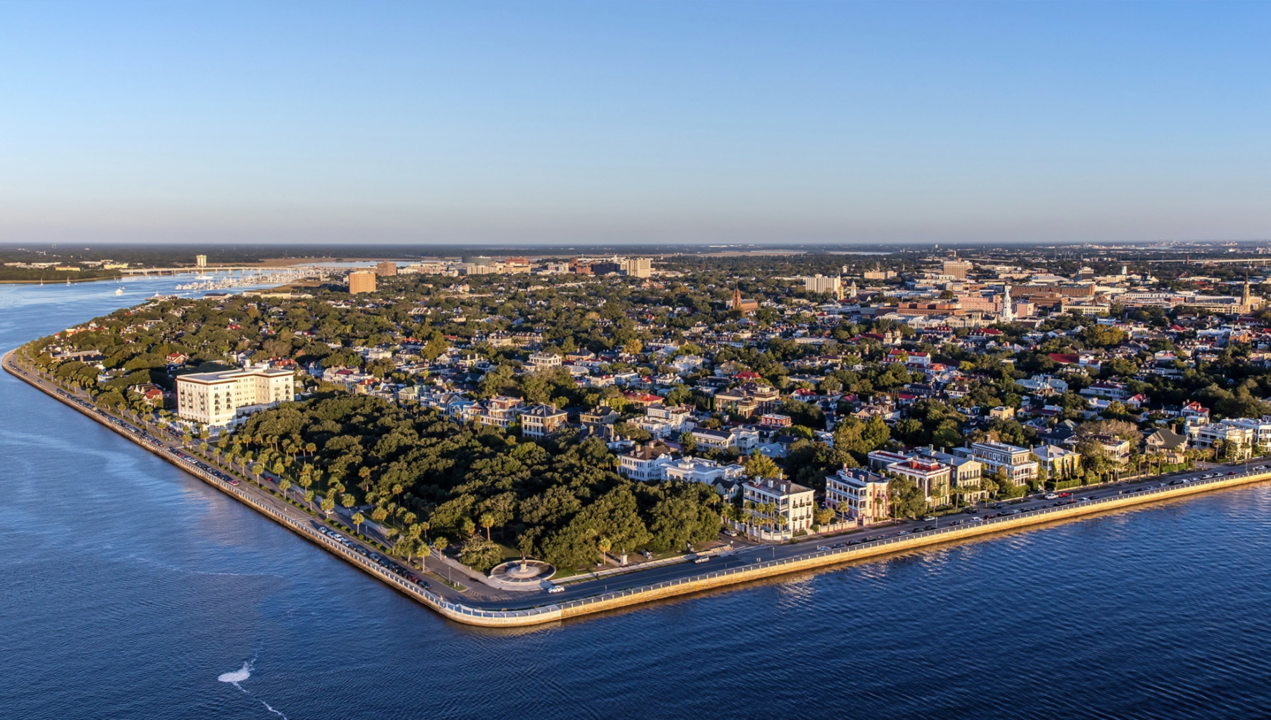 SC - My thoughts on the proposed Charleston seawall by Dr. Rob Young

I have been asked by an increasing number of people to share my thoughts on the perimeter seawall being proposed and evaluated for the city of Charleston. I have no doubt that both supporters of the project and skeptics want what is best for this special US city. To be clear, these comments do not address any social/economic justice issues with the plan or EIS.‍

Protecting the lifestyle and economy of the City of Charleston from flooding, storm damage, and long-term sea level rise will be the primary, never-ending challenge for elected officials, city staff, and engaged citizens for the foreseeable future. The hazards include rain-driven flooding, king tide flooding, storm surge flooding, and continued development of the flood plain. Managing these hazards will be expensive, and the job will never be finished.

Rising sea level will increase the impacts of all flooding directly and indirectly. The direct impacts are easy to understand. Ten inches of sea level rise will raise the average king tide by ten inches or so. The indirect impact of sea level rise is hidden beneath us. Rising sea level lifts the regional water table. That means during rain and flood events, less water can infiltrate into the ground. In fact, because the ground water close to the coast goes up and down with the tides, there will be places within the city where the water will rise up from the ground to cause flooding.

Handling storm water gets more difficult as sea level rises. Flood waters will no longer simply “run down hill” into the harbor. Over the next few decades, we will have to literally pump more and more of that water out, and away from the city. All of these challenges are made even more difficult by the fact that we continue to build in flood-prone areas. The density of development continues to increase on the Charleston Peninsula and the city at large. All of this development puts more infrastructure in harm’s way and leaves less room for water. We are struggling to solve flooding while we put more people and property at risk.

So, when folks ask me if the USACE proposed storm damage reduction project for the Charleston Peninsula makes sense, I have to view it in light of all the challenges the city will be facing over the next few decades. You can’t view this proposal in a vacuum. It doesn’t address all of the flooding issues. It primarily provides protection from modest storm surge and, to a lesser degree, nuisance flooding in some areas.

The proposed seawall needs to be viewed within a much larger, long-term plan for providing the needed resilience and sustainability for a livable Charleston— a plan that doesn’t exist yet. We got some pieces and ideas from the Dutch Dialogs process. The seawall is another potential piece. Maybe all of the wall. Maybe only some of it.

In my opinion, the problem here is that officials are being asked to approve and fund this one, narrow aspect of resilience for the City of Charleston without serious analysis as to whether or not this is the best place to start. Is this the first priority? If significant local resources are required to meet the federal match for a seawall that addresses storm surge in the historic district, will there be enough money to address the many other flooding issues that plague the city regularly, throughout the year. And, to address flood damage reduction outside of the Charleston Peninsula?

It may sound crazy, but storm surge may be the least of the challenges we face moving forward. I am actually more concerned about the increasing number of days of nuisance and rain-driven flooding in the City as a whole, than I am about storm surge damage on the Peninsula. Not to diminish what a direct hit from a hurricane could do, but the wall wouldn’t even provide full protection from a worst-case scenario storm. Furthermore, federal funds are typically available for storm rebuilding. Funds for infrastructure adaptation are harder to come by.

Just how reliable is the Corps’ economic analysis anyway. The economic analysis includes a very complex set of inputs from synthetic storms and hydrologic models, to building-level data such as first finished floor elevations. The USACE felt it important to openly acknowledge and discuss uncertainty in some datasets, but not others. Of course, some uncertainty is unknown (the next big storm will not be exactly like the synthetic storms included in the modeling). The models that predict storm surge flooding and wave heights have no error bars associated with the predictions. We know the answers aren’t exactly correct, but we don’t know how wrong they may be. At the end of the economic analysis, there is no discussion of the uncertainty in the numbers produced. The uncertainty grows as the error propagates through the lengthy analysis, yet the final numbers for damage averted and benefit/ cost ratio have no error bars or discussion of uncertainty. The final benefit/cost ratio from the Corps study contains a decimal (10.2). This is absurd. It implies a certainty that is not scientifically defensible. The anticipated “damage averted” from this project is all arm waiving.

The EIS states repeatedly that the goals of the proposed action are to protect human life and safety along with reducing property damages. There is no discussion of how the proposed action will save lives or increase safety. In fact, there is no discussion of why this is even a concern. In the last 50 years, there is documentation of only one life lost on the Peninsula due directly to storm surge flooding (during Hugo). The greatest concern is arguably a direct impact from a major storm where surge heights are 15ft plus. The wall will not provide complete protection from that kind of storm. The assertion that the proposed action is addressing loss of life and safety is not elucidated in the EIS as a problem or a solution. In fact, loss of evacuation routes and emergency vehicle access is impacted by rain-driven flooding, SLR, and nuisance flooding in a far greater way (several weeks out of the year and increasing). Therefore, the EIS only really addresses property damage reduction. Emergency preparedness is the best way to protect human lives from large storm impacts.

The analysis of how the proposed action would increase surge height and flooding in other areas is very limited. The analysis is restricted to the Region of Interest (ROI) where it is determined that the increase in flooding would be minimal. There is no analysis of the potential impacts to adjacent areas outside the ROI (James Island, Mount Pleasant, further up the rivers, etc.). This is the same principle as "fill and build," a very important topic of conversation within the City of Charleston at the moment. If the peninsula is not flooded the water must go somewhere else. The full scope of the potential impacts outside the ROI is not analyzed, but should be. This would be akin to the largest “fill and build" the city has ever seen. Even if the impacts from this proposed wall are shown to be minimal, there will be other communities and facilities in the area that will want walled protection. Again, we need a larger vision for what gets protected, how it gets protected, and the cumulative impacts to areas outside that protection.

The USACE repeatedly assumes that the City of Charleston will carry out all other planned and necessary actions to address other flood hazards within the ROI. The EIS estimates that the City has spent around $260 million since 1996 on flood reduction. The EIS also mentions much more work to do that is not the Corps' responsibility. Since the EIS assumes that the City will still need to pay for many, many other improvements beyond the $300+ million cost-match for the proposed action, the EIS (or some other supplementary analysis conducted for the city) must include an examination of the practicality/likelihood of the locality funding both the proposed action AND all other resilience needs that are pressing (nuisance flooding, precipitation-driven flooding, etc.).

Obviously, the final decision on this project is not mine to make. My goal is simply to ask questions, provide some food for thought, and to point out some issues in the process that decision-makers need to understand. I want to see the City thrive far into the future. I am fortunate to have married into a Charleston family. My wife’s ancestors go back many generations on the peninsula and they fill Magnolia Cemetery. We all want see Charleston succeed and prosper.

Director, Program for the Study of Developed Shorelines at Western Carolina University