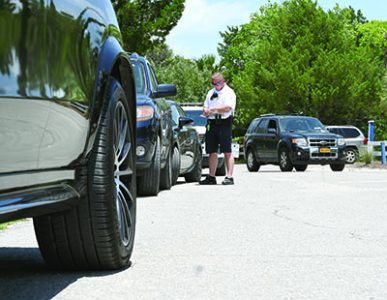 With another round of beach renourishment expected before the end of the decade, the town of Pawleys Island is looking at cuts in its four-member police department to provide money for capital projects.

“I’m not for reducing safety, but I am for figuring how how to pay for these things down the road without a tax,” Mayor Brian Henry said at a budget workshop this week. “We’ve got to find the funding to do this in the next 10 years.”

The town completed a $14.8 million beach renourishment project in March 2020. It was funded with $6.1 million the town had accumulated from a 3 percent local tax on short-term rentals, a $2.8 million loan that it is repaying with its accommodations tax and a state grant that covered the balance.

The town does not have a municipal property tax. Council Member Sarah Zimmerman said she believes most property owner aren’t aware that the town doesn’t receive any money from the property tax collected by Georgetown County, most of which goes to the county school district.

But Zimmerman recalled that her idea of a flat annual fee for beach maintenance received overwhelming support at a meeting of the Pawleys Island Civic Association in 2019.

“I personally wouldn’t have a problem writing a check for $600 or $800 every year to keep that beach,” she said.

The town hasn’t accomplished anything regarding its finances in the two years since, Zimmerman added.

“Sometimes what you accomplish is what doesn’t happen,” Council Member Guerry Green said. “There was a movement to put a parking lot in the middle part of the island and ruin everybody’s property values.”

The parking lot was seen as a way to make more of the island’s beach eligible for state and federal funds for renourishment by increasing public access. It was never considered by the council.

The town is on track to have $4.7 million in its beach fund by 2031, according to Administrator Ryan Fabbri. But that is based on the town continuing to see the boom in vacation rentals that accompanied the coronavirus pandemic. In the first nine months of 2021, the local accommodations tax collections were already 16 percent above the amount budgeted for the year.

There is no way of knowing if future rentals will continue at the same pace, Fabbri said.

Demand looks strong for next year, said Council Member Ashley Carter, “but that can change if we have a storm.” He works for Pawleys Island Realty, which manages the largest share of island rentals.

The town’s general fund, which gets most of its revenue from a state accommodations tax and a share of insurance premiums collected on the island, is projected to run deficits starting in 2024. Those can be covered by a surplus that is projected to top out at $842,000 next year.