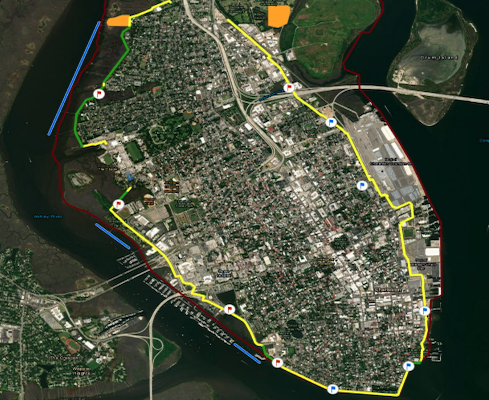 The Charleston Peninsula Coastal Flood Risk Management Study is a federal feasibility study that investigates coastal storm impacts on the Charleston peninsula. In partnership with the City of Charleston and its stakeholders, the study explores effective, economically-viable and environmentally-sound solutions to reduce risks to human health, public safety, emergency access and the economic viability of the Charleston peninsula, while enhancing overall coastal resiliency.

CHARLESTON, S.C. (WCBD) – As historic tides have impacted Charleston, city leaders discussed changes that could be crucial for the future of flood prevention.

The Army Corps of Engineers sent one of its top leaders to discuss to city council the importance of the $1.1 billion dollar sea wall and what could happen, if we’re too late in building it.

“We had the highest tides since we’ve been recording them since over 100 years ago, except for hurricanes and major storms,” says City of Charleston Mayor John Tecklenburg.

For three years, the Army Corps of Engineers and City leaders have been drafting a “Coastal Flood Risk Management Study,” looking at the impact flooding, storms and hurricanes have had on the peninsula. Through that study, officials have suggested a 12 foot storm surge wall to help mitigate storm surge impacts.

“It will not only protect us from storm surge and sea level rise and high tides, but also work in the drainage side of things too,” says Mayor Tecklenburg.

“I want to press the Charleston district to get to the completion and to the ribbon cutting. The road is long, windy, and right now we are in the feasibility phase of it,” says General Kelly.

Mayor Tecklenburg says getting the groundwork on the project now after record-breaking king tides, will get plans moving in the next few months to help prevent flooding on the peninsula.

“We must proceed with this partnership with the Corps. It enables us to get federal dollars to do what needs to be done,” Mayor Tecklenburg says.