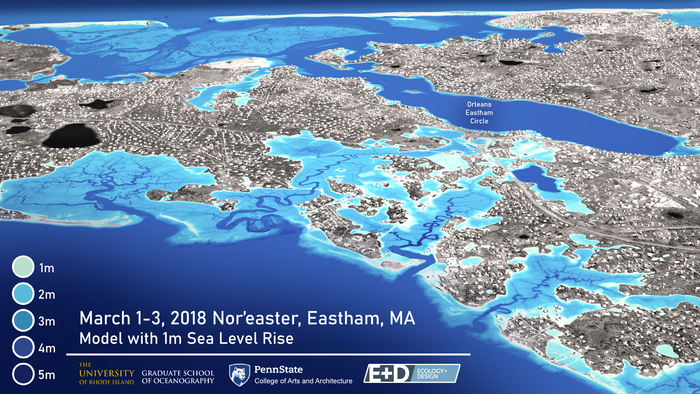 KINGSTON, R.I. – Oct. 1, 2021 – Researchers at the University of Rhode Island and Penn State University have been awarded a four-year, $1.5 million grant through the National Oceanic and Atmospheric Administration to study the effects of sea level rise and how it may exacerbate the impact of extreme weather. The project will draw on expertise from researchers at URI’s Graduate School of Oceanography, its College of the Environment and Life Sciences, the Department of Ocean Engineering within the URI College of Engineering, and the URI Coastal Resources Center.

Other collaborative participants include the Schoodic Institute and the National Park Service. The overall goal of the project is to help communities, the National Park Service, and the U.S. Fish and Wildlife Service adapt and improve their resilience as climate continues to change and extreme weather such as hurricanes and nor’easters continue to increase in terms of frequency and severity.

According to NOAA, the rate of sea level rise is accelerating. Since 1993, the average global sea level has increased by 3.4 inches. By the end of the century, it is likely to rise at least one foot over 2000 levels. Sea level plays a role in flooding, shoreline erosion, and other hazards, affecting nearly 40 percent of the U.S. population living in high-population density coastal areas. However, despite what is known about sea level rise, there is a lack of research available when it comes to how the impacts of nor’easters and hurricanes may be amplified as a result.

“There are a number of studies that have been done looking at just sea level rise or just extreme weather, but what we’re really lacking in terms of clear understanding is the combined impact of these two phenomena,” said Isaac Ginis, professor of oceanography, who is leading the study. “This is especially important to us on the East Coast and in New England, where we’ve seen significant coastal flooding produced by waves and storm surge during nor’easters and hurricanes. How these effects are amplified by sea level rise has been largely unexplored. This information gap inhibits our ability to properly plan for the future and is likely to lead to under-informed and ineffective adaptation measures.”

The project was supported by all four members of Rhode Island’s congressional delegation and received letters of support from more than 15 local communities and local non-profits.

Using state-of-the-art atmosphere, storm surge and wave/erosion modeling the team will provide high-resolution recreations of the impact of future storm and sea level rise scenarios, identifying vulnerabilities in the ecosystems and infrastructure of the identified sites and their adjacent communities. The modeling will also include hazard, risk, and adaptability assessments, as well as mitigation scenarios.