Northeast
Oyster cages floating in Dutch Harbor off the coast of the Chase farm. Four pending applications, if approved, would add 13,000 more cages in the waterway. PHOTO BY ANDREA VON HOHENLEITEN 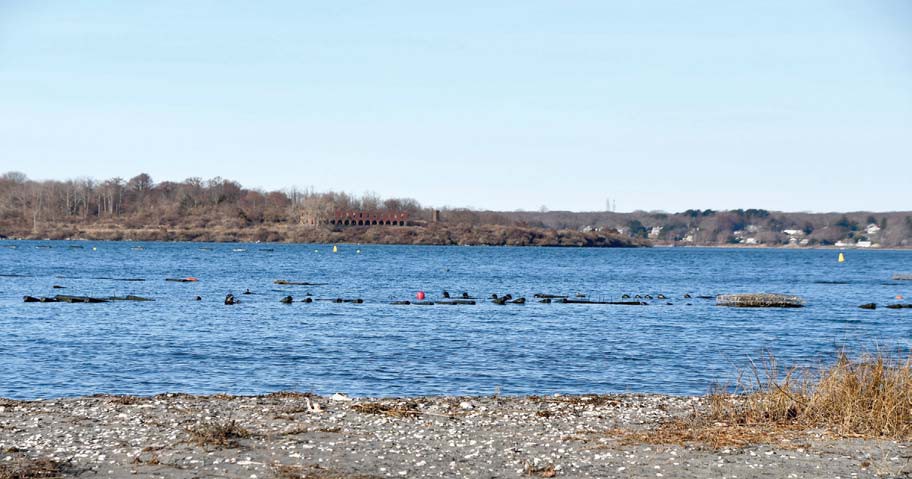 After drawing concerns from abutting residents, the proposed expansion of three aquaculture farms in Dutch Harbor has dredged up proliferation questions from the town council.

The stretch of Narragansett Bay in the West Passage between the Verrazzano Bridge and the Great Creek is home to six oyster farms, four of which have pending applications with the Coastal Resources Management Council, the state agency that has jurisdiction over aquaculture permits. Homeowners with views of the harbor, mostly from Westwind Drive, have been expressing their apprehensions to the councilors, including 10 letters objecting to the applications in February and March.

“Mostly their concern is how big the fields are getting,” Town Administrator Jamie Hainsworth said, “and how it could bother boating or recreational activity.”

In the week following the council’s Feb. 18 meeting, Hainsworth met with two representatives from the state coastal agency to discuss the situation and tour the area. Currently, there are four aquaculture farms on Dutch Harbor: Walrus & Carpenter Oysters, Seakist Aquaculture, Sweet Victory Oyster Farm and Sunset Beach Aquaculture, which is owned by Antonio and Joseph Pinheiro. The two farms outside of Dutch Harbor include a company-owned Adam Silkes, which is northwest but still south of the bridge.

The letters by the Westwind Drive contingency are objecting to the application by Seakist, which is requesting 12,000 more cages and the same number of black floats to keep them buoyant. Silkes is asking for 1,164 additional cages and 2,238 floats, and the Pinheiros are seeking permission to moor an 800-square-foot working platform on the harbor. There is also an application for Walrus & Carpenter to relocate its farm a half-mile north, although the letters did not mention that proposal.

“It’s hard to determine how many cages are out there right now, because cages come in different sizes,” Hainsworth said. “Under the new applications, they might be putting smaller or larger cages.”

Although there is concern over the applications, the homeowners explicitly noted that they do not object to aquaculture farming on Dutch Harbor. The letters include a boilerplate statement that says, “We feel the wants and needs of the oyster farmers have taken precedence over the concerns of homeowners, boaters, swimmers, kayakers and other recreational users.”