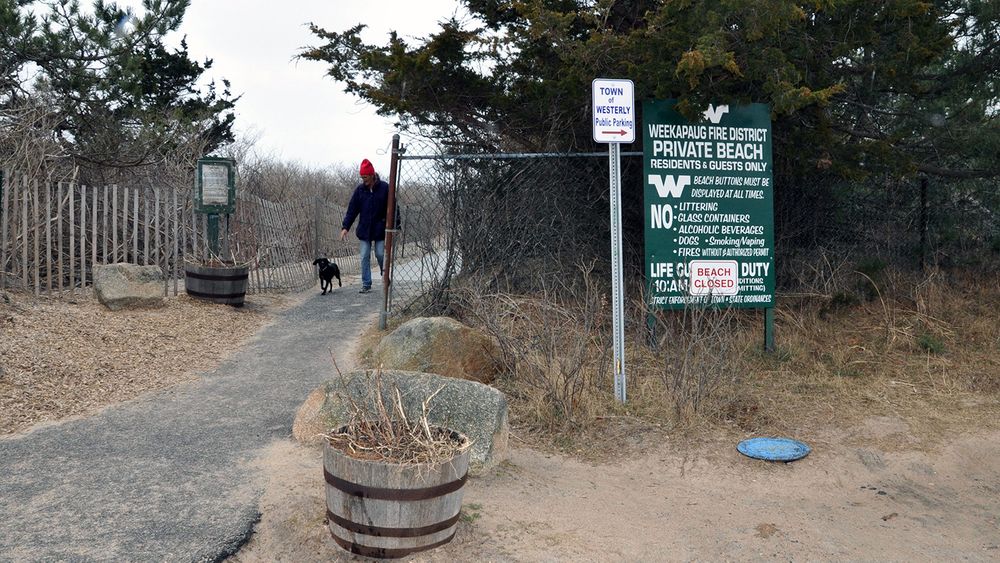 Rhode Island boasts of its nearly 400 miles of shoreline, yet the state’s eight public saltwater beaches border less than seven miles of that waterfront. Much of the remaining land along the shore is privately owned. The public has the legal right to the coastal waterfront, but wealthy shoreline communities are getting more exclusive. Special fire districts—which sometimes don’t even fight fires at all—are a big factor in the growing tensions over shoreline access.

The southern Rhode Island coastline is one of the most picturesque stretches of waterfront in the state, but unless you own property or are staying in a resort, it’s often hard—and in some cases nearly impossible—to get to.

Earlier this year, Ben Weber and I met in one of those spots: a parking area at the start of the barrier beach east of Weekapaug Point in Westerly. We were feet from the boardwalk down to the beach sand and waves of the Atlantic Ocean, right in the heart of the Weekapaug Fire District.

But we didn’t find any fire trucks stationed nearby.

The fire district does, however, own more than 60 acres of coastal property, including this boardwalk. The district allows beach access through the path for its residents, their guests, and people staying at the upscale Weekapaug Inn nearby.

But it can restrict the general public, which, beachgoers say, it began doing more aggressively last year, pointing to the pandemic as justification.

“They just decided they didn’t want to let anybody use that one,” Weber said. “That is their right of way. That is their land. They stood their ground and said no because of COVID: ‘Now we’re not letting anybody but our own people use it.’ So the public’s not allowed to use the lands that they’ve always used.”