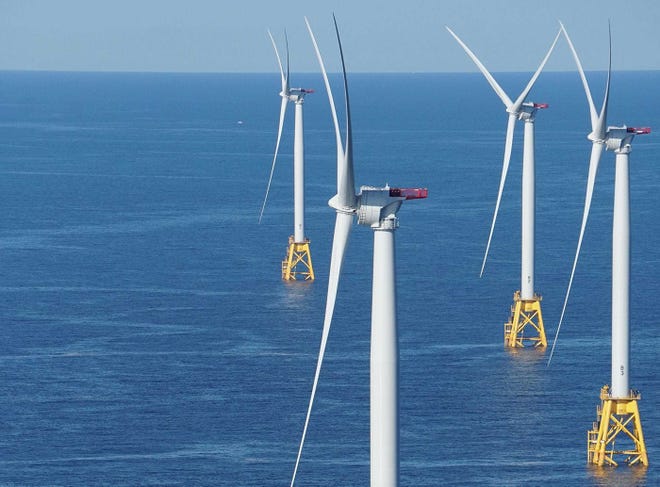 PROVIDENCE — Offshore wind developers have assured the commercial fishing industry all along that the thousands of massive turbines that they want to install in the ocean up and down the East Coast won’t block fishermen from waters where they make their living.

Take for instance this passage from the Army Corps of Engineers in the Record of Decision for the 62-turbine project that would be built off the coast of Rhode Island and Massachusetts:

“While Vineyard Wind is not authorized to prevent free access to the entire wind development area, due to the placement of the turbines it is likely that the entire 75,614 acre area will be abandoned by commercial fisheries due to difficulties with navigation.”

The statement represents the worst-case scenario for fishermen and contradicts what Commerce Secretary Gina Raimondo and Bureau of Ocean Energy Management director Amanda Lefton said last Tuesday in a press call on the approval about their hopes of having the two industries coexist.

It also runs counter to other parts of the written decision that say that spacing between the turbines and their uniform layout in a grid pattern will allow for safe passage of vessels within the 800-megawatt wind farm.

“We were hoping for some answers in this ROD, but only got more questions,” said Annie Hawkins, executive director of the Responsible Offshore Development Alliance, a group representing fishing interests on offshore wind issues.

The Record of Decision was issued by BOEM, the lead permitting agency for offshore energy projects in federal waters, and was also signed by the Army Corps and the National Marine Fisheries Service, which is part of the Department of Commerce.

In response to questions about the Army Corps statement, BOEM said that it has been working with offshore wind developers and the fishing industry to reduce impacts and pointed out that its own analysis and a Coast Guard study concluded that fishing vessels would be able to navigate through the Vineyard Wind project.

“It is important to note that the approval of the Vineyard Wind 1 offshore wind project does not limit the right to navigate or fish within the project area,” an agency spokesperson said.

Vineyard Wind did not respond to a request for comment.