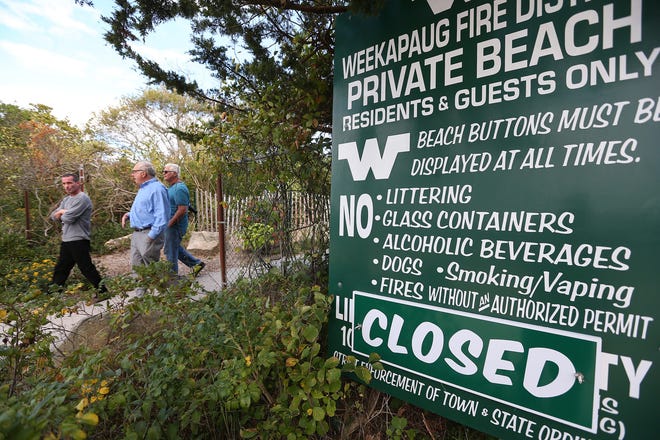 WESTERLY — Ben Weber started working for his father's construction company when he was a teenager. So a few years later, when a security guard at Fenway Beach in Weekapaug tried to tell him that he wasn't supposed to be there because it was private, he knew the solution was to find a public easement.

Weber, then 20, went to Westerly Town Hall and came away with a map that he held on to for years. In his recollection, it showed that the state owned a section of the cove that was shaped like a slice of pie, with the widest part providing ample room to throw down a towel on the dry sand. Because it was public land, the Weekapaug Fire District, which owns the rest of the beach, couldn't eject him.

He eventually lost that map, something he's still upset about, and he's never found another one like it. But more than two decades later, he's using that same strategy to fight for the public's right to access the shoreline in Westerly.

Frustrated by the number of security guards and "Private — Residents Only" signs that have proliferated in his hometown, Weber has been spending hours digging through old land records in the basement of Town Hall. His goal is to rediscover public rights of way that have been lost over time, and take on the fire districts that restrict access to some of the most desirable parts of Westerly's coastline.

Who owns the right of way to Quonochontaug Barrier Beach?

Working with other activists in the area, who have been gathering archival evidence of their own, Weber is fighting to reopen a barricaded right of way at Quonochontaug Barrier Beach — which, confusingly, some locals call Weekapaug Beach.

Before he was born, his family regularly drove down to tailgate there. But in recent summers, the pristine two-mile stretch of sand has effectively been closed to anyone but a select group of homeowners.

That's because Weekapaug Fire District, which doesn't fight fires and functions more like a homeowners association, controls the only pathways onto the beach and has security guards keeping the public at bay.

Rhode Island's Constitution guarantees the right to passage along the shoreline, but it doesn't say you have the right to walk across dry sand to get there. That's why having public rights of way is "imperative," Weber said. And there's potentially one that leads to Quonochontaug Barrier Beach, but it's blocked by a fence and overgrown shrubbery.

More: Waterfront Warwick neighborhoods are full of 'No Parking' signs. Many aren't legal.