Northeast
Volunteers plant plugs of beach grass through a biodegradable mat as part of a test project to reduce erosion along a beach and bluff in East Providence, R.I. (Tim Faulkner/ecoRI News) 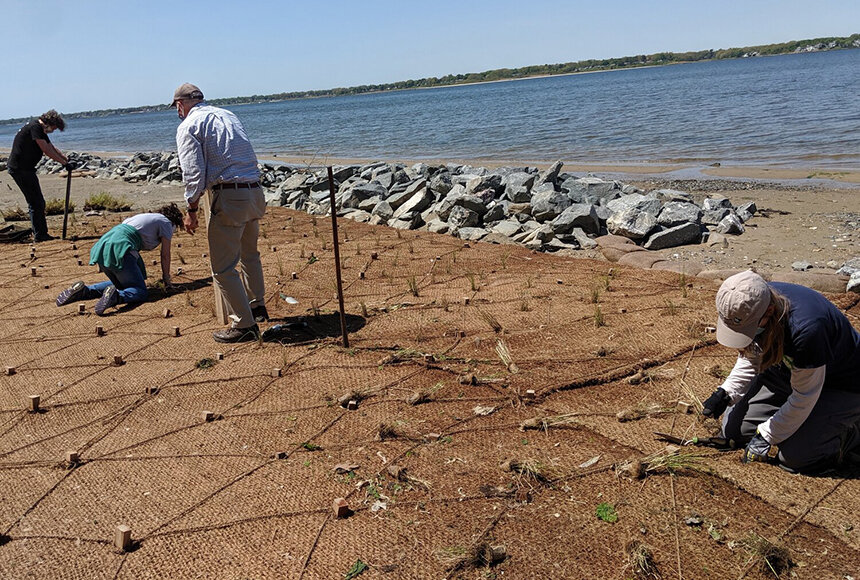 EAST PROVIDENCE, R.I. — There is no foolproof approach to stopping coastal erosion, but an experimental “living shoreline” is being tested at a local beach in an attempt to lessen the destructive effects of the climate crisis.

Current waterfront defenses such as stone barriers, known as riprap, and cement seawalls protect what’s behind them but they decimate beaches and natural buffers like salt marsh and seagrass beds. These human-made barricades accelerate the degradation of nearby natural habitat by deflecting wave energy. Thirty percent of Narragansett Bay’s waterfront is already “hardened” by development. But even with a Rhode Island prohibition on new coastal stone and cement barriers the damage is worsening.

Existing natural habitat like salt marsh is the ideal defense, but the Ocean State’s shoreline is losing its protective vegetation to higher tides, intensifying storms, and wave action from boat wakes.

“One of the goals of this project is to find an effective, convenient erosion-control method that does not worsen erosion in adjacent areas, and also provides habitat benefits,” Freedman said.

The unassuming public beach and park has been a retreat for generations. Worn wooden posts and concrete rubble from failed walls are reminders that the beach was developed extensively. A boardwalk, bathhouse, and 400-foot steamship pier were part of the former Crescent Park amusement center. A massive shore dinner hall sat atop the bluff overlooking Narragansett Bay. The park’s remnants show nature’s capacity to reshape and reclaim places — a force that is accelerating with the climate crisis.