International
WindFloat Atlantic's turbines are the largest ever installed on a floating platform. via Windplus 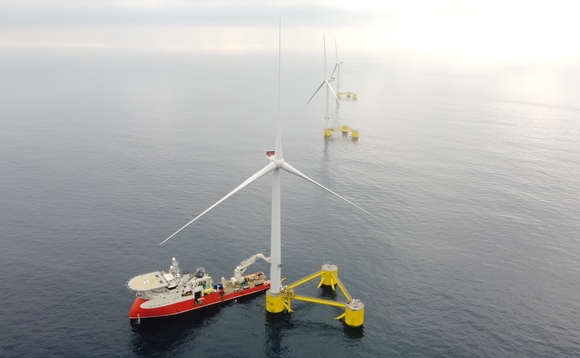 WindFloat Atlantic project off the coast of Portugal is the world's first semi-submersible floating wind farm, according to its developers.

Following a decade in development, the last of three floating wind platforms which comprise the WindFloat Atlantic project off the coast of Portugal was connected to the 20km export cable running to the substation at Viana do Castelo today, marking the completion of the wind farm.

The Windplus consortium behind the project - which is led by EDP Renewables alongside ENGIE, Repsol and Principal Power - claims the floating wind farm has the potential to save almost 1.1m tons of CO2 each year.

With a total installed capacity of 25MW, WindFloat Atlantic is the world's first semi-submersible floating wind farm, while the three 8.4MW wind turbines are also the largest ever installed on a floating platform, the developers claim. Each of the three turbines measure 30 metres in height, while the project's mooring technology enables installation in waters over 100 metres deep. The turbines were assembled on land and pulled onto the platforms using and standard tug boats, they explained.

Unlike traditional offshore wind turbines, floating wind farms are not built upon the seabed, enabling them to be situated further out at sea in deeper waters where winds are often stronger, allowing higher levels of electricity generation.