Caribbean
Elkhorn coral (left) and mountainous star coral (right) were once ubiquitous in the Caribbean. Their numbers have dropped greatly due to bleaching and disease. Pollution is partly to blame. FROM LEFT: NICK HOBGOOD/WIKIMEDIA COMMONS (CC BY-SA 3.0); NOAA FISHERIES 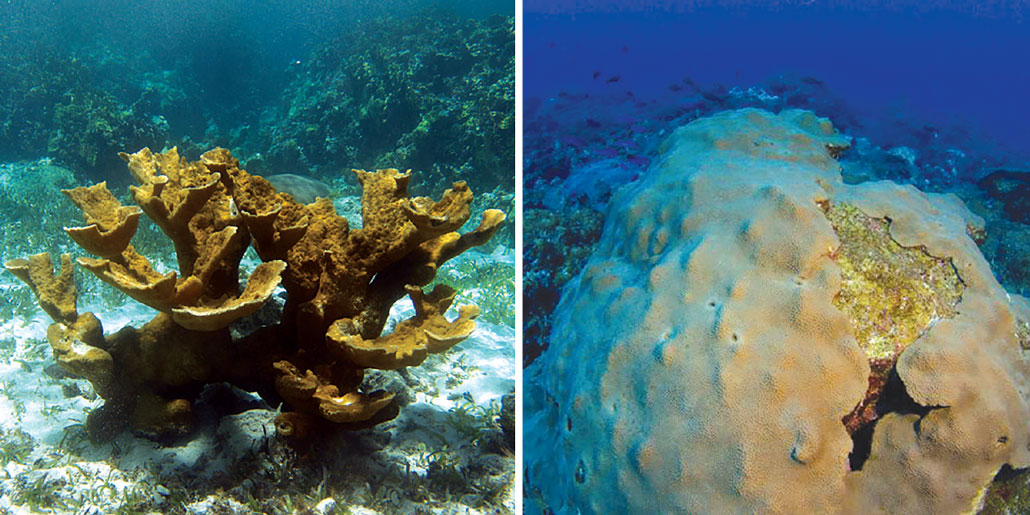 Hurricane Maria struck the island of Puerto Rico early on September 20, 2017, with 250-kilometer-per-hour winds, torrential rains and a storm surge up to three meters high. In its wake: nearly 3,000 people dead, an almost yearlong power outage and over $90 billion in damages to homes, businesses and essential infrastructure, including roads and bridges.

Geologist and diver Milton Carlo took shelter at his house in Cabo Rojo on the southwest corner of the island with his wife, daughter and infant grandson. He watched the raging winds of the Category 4 hurricane lift his neighbor’s SUV into the air, and remembers those hours as some of the worst of his life.

For weeks, the rest of the world was in the dark about the full extent of the devastation, because Maria had destroyed the island’s main weather radar and almost all cell phone towers.

Far away on the U.S. West Coast, in Santa Cruz, Calif., oceanographer Olivia Cheriton watched satellite radar images of Maria passing over the instruments she and her U.S. Geological Survey team had anchored a few kilometers southwest of Puerto Rico. The instruments, placed offshore from the seaside town of La Parguera, were there to track pollution circulating around some of the island’s endangered corals.

More than half a year went by before she learned the improbable fate of those instruments: They had survived and had captured data revealing hurricane-related ocean dynamics that no scientist had ever recorded.

The wind-driven coastal currents interacted with the seafloor in a way that prevented Maria from drawing cold water from the depths of the sea up to the surface. The sea surface stayed as warm as bathwater. Heat is a hurricane’s fuel source, so a warmer sea surface leads to a more intense storm. As Cheriton figured out later, the phenomenon she stumbled upon likely played a role in maintaining Maria’s Category 4 status as it raked Puerto Rico for eight hours.

“There was absolutely no plan to capture the impact of a storm like Maria,” Cheriton says. “In fact, if we somehow could’ve known that a storm like that was going to occur, we wouldn’t have put hundreds of thousands of dollars’ worth of scientific instrumentation in the water.”

A storm’s path is guided by readily observable, large-scale atmospheric features such as trade winds and high-pressure zones. Its intensity, on the other hand, is driven by weather events inside the hurricane and wave action deep below the ocean’s surface. The findings by Cheriton and colleagues, published May 2021 in Science Advances, help explain why hurricanes often get stronger before making landfall and can therefore help forecasters make more accurate predictions.

Cheriton’s original research objective was to figure out how sea currents transport polluted sediments from Guánica Bay — where the Lajas Valley drains into the Caribbean Sea — to the pristine marine ecosystems 10 kilometers west in La Parguera Natural Reserve, famous for its bioluminescent waters.

Half of corals in the Caribbean have died since monitoring began in the 1970s, and pollution is a major cause, according to an April 2020 study in Science Advances. Of particular interest to Cheriton, Sherman and their colleagues was whether the pollution had reached deepwater, or mesophotic, reefs farther offshore, which could be a refuge for coral species that were known to be dying in shallower areas.

The main artery for this pollution is the Rio Loco — which translates to “Crazy River.” It spews a toxic runoff of eroded sediments from the Lajas Valley’s dirt roads and coffee plantations into Guánica Bay, which supports a vibrant fishing community. Other possible contributors to the pollution — oil spills, a fertilizer plant, sewage and now-defunct sugar mills — are the subject of investigations by public health researchers and the U.S. Environmental Protection Agency.

The main artery for this pollution is the Rio Loco — which translates to “Crazy River.” It spews a toxic runoff of eroded sediments from the Lajas Valley’s dirt roads and coffee plantations into Guánica Bay, which supports a vibrant fishing community. Other possible contributors to the pollution — oil spills, a fertilizer plant, sewage and now-defunct sugar mills — are the subject of investigations by public health researchers and the U.S. Environmental Protection Agency.

In June 2017, the team convened in La Parguera to install underwater sensors to measure and track the currents in this threatened marine environment. From Sherman’s lab on a tiny islet overrun with iguanas the size of house cats, he and Cheriton, along with team leader and USGS research geologist Curt Storlazzi and USGS physical scientist Joshua Logan, launched a boat into choppy seas.