Pacific Northwest
Lottie Sam prepares salmon, saying “The only thing we don’t eat is the bones and the teeth, but everything else is sucked clean.” Tony Schick / OPB 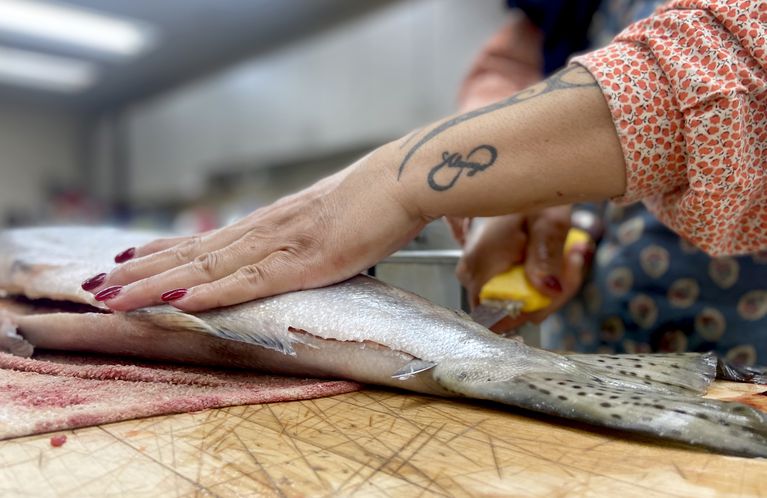 For decades, the U.S. government has failed to test for dangerous chemicals and metals in fish. So, we did. What we found was alarming for tribes.

This is the latest part in a series produced in partnership with the ProPublica Local Reporting Network.

Salmon heads, fins and tails filled baking trays in the kitchen where Lottie Sam prepped for her tribe’s spring feast.

The sacred ceremony, held each year on the Yakama reservation in south-central Washington, honors the first returning salmon and first gathered roots and berries of the new year.

“The only thing we don’t eat is the bones and the teeth, but everything else is sucked clean,” Sam said, laughing.

Her mother and grandmother taught her that salmon is a gift from the creator, a source of strength and medicine that is first among all foods on the table. They don’t waste it.

“The skin, the brain, the head, the jaw, everything of the salmon,” she said. “Everybody’s gonna have the opportunity to consume that, even if it’s the eyeball.”

Sam is a member of the Confederated Tribes and Bands of the Yakama Nation. They are among several tribes with a deep connection to salmon in the Columbia River Basin, a region that drains parts of the Rocky Mountains of British Columbia, Canada, southward through seven U.S. states into the West’s largest river.

It’s also a region contaminated by more than a century of industrial and agricultural pollution, leaving Sam and others to weigh unknown health risks against sacred practices.

“We just know that if we overconsume a certain amount of it that it might have possible risks,” Sam said as she gutted salmon in the bustling kitchen. “It’s our food. We don’t see it any other way.”

But while tribes have pushed the government to pay closer attention to contamination, that hasn’t happened. Regulators have done so little testing for toxic chemicals in fish that even public health and environmental agencies admit they don’t have enough information to prioritize cleanup efforts or to fully inform the public about human health risks.

So Oregon Public Broadcasting and ProPublica did our own testing, and we found what public health agencies have not: Native tribes in the Columbia River Basin face a disproportionate risk of toxic exposure through their most important food.

OPB and ProPublica purchased 50 salmon from Native fishermen along the Columbia River and paid to have them tested at a certified lab for 13 metals and two classes of chemicals known to be present in the Columbia. We then showed the results to two state health departments, U.S. Environmental Protection Agency officials and tribal fisheries scientists.