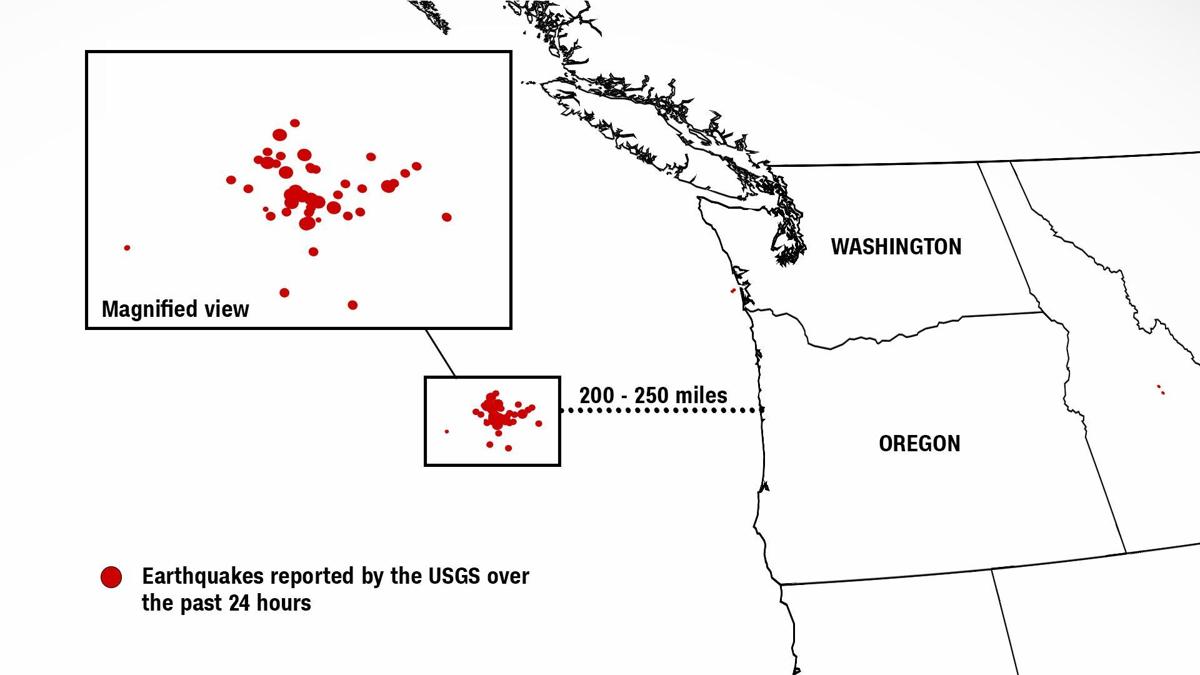 One of North America's most active fault lines sprung to life on Tuesday after a swarm of more than 40 earthquakes -- ranging from a magnitude 3.5 to 5.8 -- rattled off the coast of Oregon, catching the attention and concern of millions in the region.

The series of quakes, which began early Tuesday morning and continued into Wednesday, were all clustered between 200-250 miles west of the coastal town of Newport, OR, far enough to be mostly undetected on land, but given the area's seismic history, it is creating quite a buzz.

"If you had asked me yesterday where on Earth would be most likely to produce a bunch of magnitude 5.0+ quakes in a single day, this would have been high on my list," Harold Tobin, Director of the Pacific Northwest Seismic Network at the University of Washington, told CNN.

The fault line responsible for the quakes is the Blanco Fracture Zone. According to an analysis by Oregon State University, it is more active than the infamous San Andreas Fault in California, having produced more than 1,500 quakes of magnitude 4.0 or greater since the 1970s.

Not all quakes are created equal

What has been most impressive about this week's quakes is the swarm has included at least 9 tremors reaching a magnitude 5.0 to 5.8, with the majority occurring at a shallow depth of only 10 km.

The sheer number of magnitude 5.0 or greater quakes in the region triples the annual average (three 5.0+ quakes per year) since 1980, according to the USGS database.

Fortunately, according to the US National Tsunami Warning Center, none of this week's quakes have triggered a tsunami alert.

However, the activity has heightened the concern level for some, as the region is among the most earthquake-prone areas in North America and has already produced one of the largest quakes in the continental United States on January 26, 1700. The quake occurred on the neighboring Cascadia Subduction Zone, a megathrust fault much closer to land, where the Juan de Fuca plate dives underneath the North American Plate. This fault can not only trigger devastating tsunamis but also destructive shaking.

Though the epicenter of this week's swarm of quakes, the Blanco Fracture Zone, is among the most seismically active in North America, it rarely leads to destructive quakes.

"Blanco Fracture zone quakes are strike-slip (lateral motions of the crustal blocks on either side, rather than up-down displacement), so it is very unlikely for them to pose a tsunami threat, even if a bigger quake happened, like a magnitude 7.0 for example," Tobin told CNN.

According to seismologist Dr. Lucy Jones, there have been more than 133 quakes of magnitude 5 or greater on the Blanco Fracture Zone since 1980 and have never been followed by something on land.

"Today's quakes can be thought of as something like a main-shock and a swarm of aftershocks, the one distinction being that in this case, there's not a lot of magnitude difference among them," Tobin said.