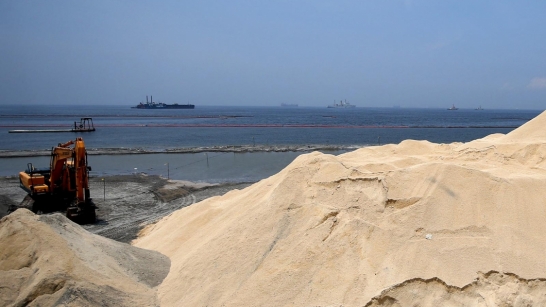 To truly rehabilitate Manila Bay, it’s much better for government to, say, drastically reduce pollutants at their sources and to protect mangrove areas. Dumping rocks is as dumb as it sounds.

It’s a policy as dumb as a dolomite rock.

Manila residents and visitors were greeted in early September by mountains of synthetic white sand that suddenly materialized along the Manila Baywalk.

In fact, those were some 3,500 tons of crushed dolomite rocks shipped all the way from Alcoy, Cebu, ostensibly to “rehabilitate” Manila Bay and promote it as “another Boracay within the country’s capital.”

It’s part and parcel of a P390 million “beach nourishment, coastal restoration, and enhancement” of the Manila Baywalk.

To justify the project, especially its timing, Presidential Spokesperson Harry Roque said it might help improve people’s mental health during the pandemic.

But many groups saw the project for what it truly is: a cosmetic and ill-thought waste of money. Heck, a disaster scientist foresees that the dolomite rocks will simply be swept away and washed to the bottom of the sea.

The project is also profoundly “insensitive,” as Vice President Leni Robredo rightly put it, and ill-timed given the global pandemic we’re still battling.

All in all, it’s a stupid policy. But what’s new?

Defenders of this beautification project like to point to a 2008 Supreme Court case (MMDA vsConcerned Citizens of Manila Bay) where the high court ordered government to “clean up, rehabilitate, and preserve Manila Bay.”

This landmark case is so important that the Manila Bay Advisory Committee, tasked to monitor government’s compliance with this order, is headed by no less than the Chief Justice.