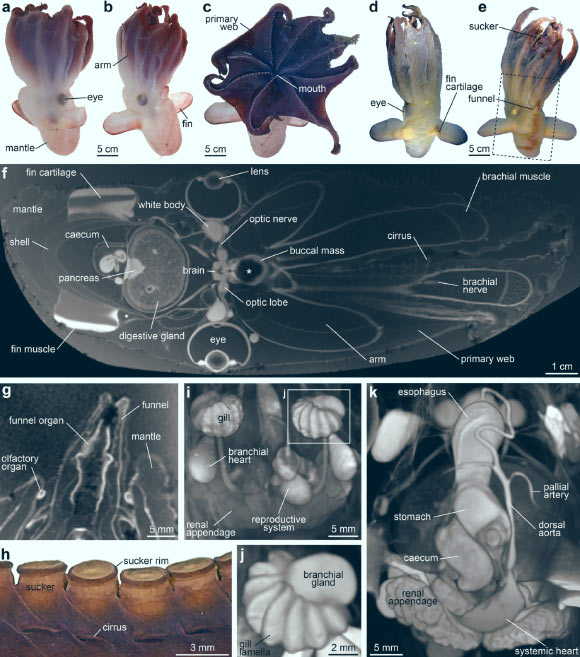 A team of biologists from the Institut für Evolutionsbiologie und Ökologie at the Rheinische Friedrich-Wilhelms-Universität has discovered a new species of dumbo octopus.

roup of deep-sea-dwelling octopuses that includes around 45 species.

Amongst cephalopods, they constitute relatively rare organisms, despite forming a significant part of the megafauna in deep-sea habitats of the World Ocean down to at least 7,000 m (4.3 miles) depth.

“Their name is based on the flying elephant from the Walt Disney movie of the same name, who is made fun of because of his unusually large ears,” explained Dr. Alexander Ziegler and Dr. Christina Sagorny from the Institut für Evolutionsbiologie und Ökologie at the Rheinische Friedrich-Wilhelms-Universität.

“The fins of the dumbo octopuses are on the sides of the head resemble these elephant ears.”

Current methods used to describe new cephalopod species often require dissection to examine internal organs, which involves damage to or even partial destruction of a specimen and may thus preclude analysis of singular, endangered, rare, or otherwise valuable organisms.

Dr. Ziegler and Dr. Sagorny combined non-invasive methods including digital photography, standardized measurements, MRI and micro-CT, with minimally-invasive tissue sampling for DNA analysis to gather morphological as well as molecular information on a single specimen of dumbo octopus collected from depths of more than 4,000 m (2.5 miles) in the North Pacific Ocean.