International
via Australian Department of Defence 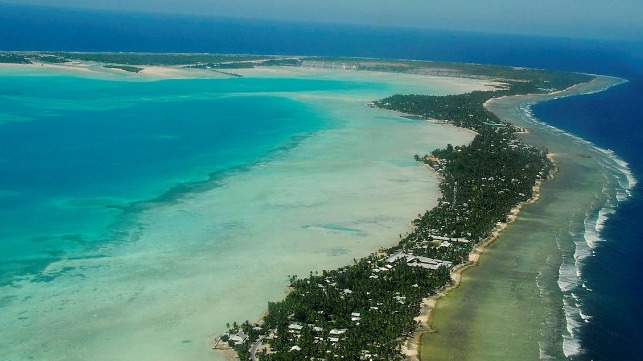 Pacific - China Expands Its Island-Building Strategy Into the Mid-Pacific

The world knows the Republic of Kiribati as a very low-lying nation in the mid-Pacific that is in danger of inundation as the climate changes and sea levels rise.

Much less is known about its strategic location and the attention now being paid to it by Beijing, which has proposed large-scale dredging to reclaim land from lagoons. The aims are to raise the height of atolls and create land for industrial development, including two major ports. The massive works will likely be carried out by the same fleet of dredgers used by China to build artificial islands in its aggressive expansion into the South China Sea, and will almost certainly cause the same severe destruction of coral reefs in Kiribati.

Kiribati lies at the true geographic centre of the vast Pacific Ocean, straddling both the equator and the 180-degree meridian of longitude, and is the only country in the world to span all four hemispheres. Comprising 32 coral atolls and one raised-coral island, Kiribati has three distinct island groups—the Gilbert Islands in the west, the Line Islands in the east and the Phoenix Islands in the middle—with separate exclusive economic zones. The combined EEZ covers 3.5 million square kilometers, about half the size of Australia, and hosts some of the largest remaining potentially sustainable stocks of tuna and other migratory fish, as well as deep seabed minerals. The land area of all the islands combined is only 800 square kilometers and the population is about 120,000.

The TKP’s national development manifesto, the "Kiribati 20-year vision," which looks set to be integrated into China’s Belt and Road Initiative, gives highest priority to building two transhipment hubs - major ports in a tiny country that has no economic market for such facilities.

One hub is planned at the capital of Tarawa Atoll in the west, which was the site of the first major amphibious landing by US forces in the push against Japan during World War II. The second is planned at the strategically located Kiritimati (‘Christmas’) Atoll in the east, directly south of Hawaii and the major US bases there.