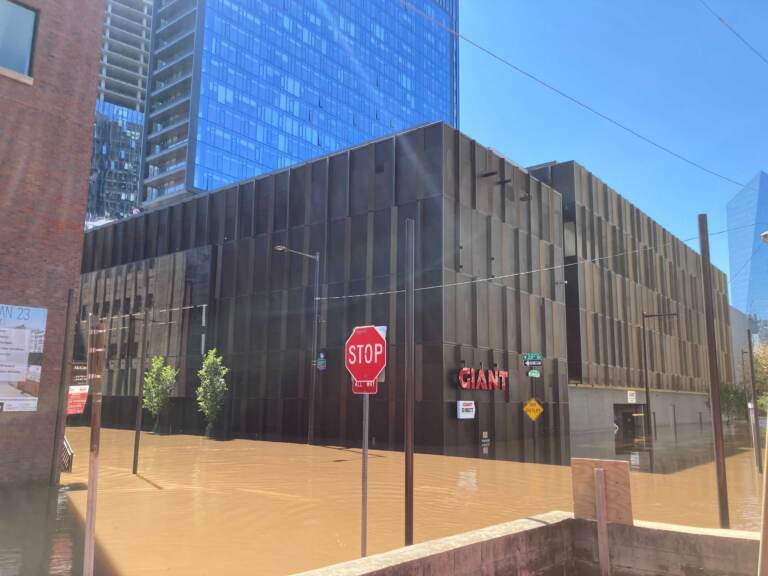 A lake of muddy brown stormwater filled the intersection of North 23rd and Arch streets, swamping the corner’s glass-walled Giant supermarket and the gleaming new Riverwalk apartment tower above.

Marooned tenants occasionally emerged onto the entrance patio and stood gazing across the rippling murk. Late Thursday afternoon, a resident who had been ferried across the pond by a Coast Guard boat paced the muddy upslope of 23rd Street, complaining bitterly about the building management. Their inadequate preparation for the remnants of Hurricane Ida the previous night was the latest in a series of missteps since he moved in a few months ago, he said.

“They said the construction would be done by this date. The construction is still not done today,” said the man, who declined to give his name for fear of retaliation from his landlord. “So the flooding was definitely not even mentioned. A lot of people are very, very upset.”

“The building is not prepared for anything, let alone a disaster like this,” he said.

Those stuck inside had not heard anything from the building manager until 2:36 p.m., when an email announced the company was in the process of getting a boat, he said. “We will be picking up beer and snacks and hosting a ‘flood’ party that will be set up in the lounge area,” the message read. Executives at the management company, PMC Property Group, did not respond to messages seeking comment.