Pacific Northwest
Iron Gate Dam is about 200 miles from the ocean on the Klamath River in Northern California. It is one of four dams slated for removal by the end of 2024. Michael Wier / Courtesy of the Klamath River Renewal Corporation 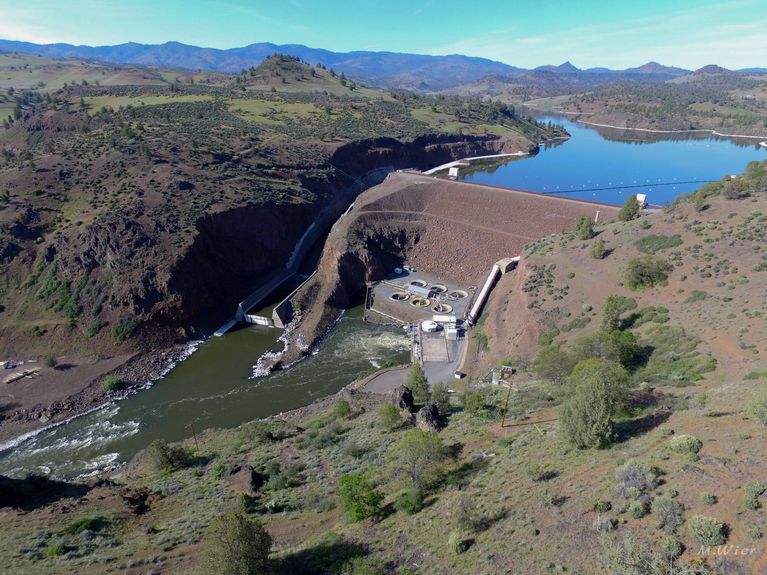 The four-dam teardown brings hope and uncertainty to residents in an area of Southern Oregon and Northern California where drought has made water a source of controversy.

Looking down at a pool filled with Klamath River salmon swimming back to their spawning grounds, Karuk Tribal Councilor Aaron “Troy” Hockaday says he can’t wait to see what the future holds for them.

“These fish right here give me hope,” he said. “They had a long journey from the mouth of the Klamath coming up here, so right now what they’re doing is resting a little bit.”

It’s a spot at the confluence of the Klamath and Scott rivers near the Northern California town of Yreka. Hockaday comes here often to check on the salmon that are vital to his people and their culture.

Right now, there aren’t many salmon for the Karuk and other area tribes to catch. That’s because hundreds of miles of salmon spawning habitat are blocked by four dams on the lower Klamath River.

But an historic decision made on Thursday in Washington, D.C. holds the promise to change that. The Federal Energy Regulatory Commission’s approval of removing those four dams should set free a huge stretch of one of the West’s most important coastal rivers for salmon and reopen 400 miles of habitat — much of which salmon have been unable to reach for more than a century.

“It’s gonna be one of the best things for our fish and our fisheries,” Hockaday said. “It’s been a long, long journey to get to where we are today.”

Next year, deconstruction work will begin at JC Boyle, Copco 1, Copco 2 and Iron Gate dams, with the biggest dams scheduled to be removed in 2024.

Getting to this point has taken decades of negotiation and planning, and removing the four dams will be a massive, $500 million undertaking that many in the surrounding communities still oppose.

Pros and cons of dam removal

The Klamath River drains an arid basin that straddles two states. It flows from Upper Klamath Lake in the high desert of south-central Oregon, crosses the California state line, and empties into the Pacific Ocean. Tearing down four of its dams won’t just open up habitat to boost salmon populations. Supporters say a more free-flowing river will also improve water quality by removing the dam’s reservoirs where warm water pools, collects pollution from agricultural runoff and invites toxic algae growth and bacteria that can cause fish die-offs.

But in the drought-stricken Klamath River Basin, anything connected to water is controversial — including dam removal. Opponents argue those reservoirs are vital to surrounding communities because they provide tax revenue, recreation opportunities and waterfront property values that will be lost when the dams are taken out.

Residents in both of the counties surrounding the dams slated for removal have voted overwhelmingly over the past decade in favor of keeping the dams in place because of the benefits they offer and the potential for dam removal to create problems with flooding and the release of sediment stored behind the dams.

After first trying to relicense the dams in the early 2000s, PacifiCorp agreed to remove them in 2016to avoid the cost of building fish ladders that would have been required to help salmon swim upstream.