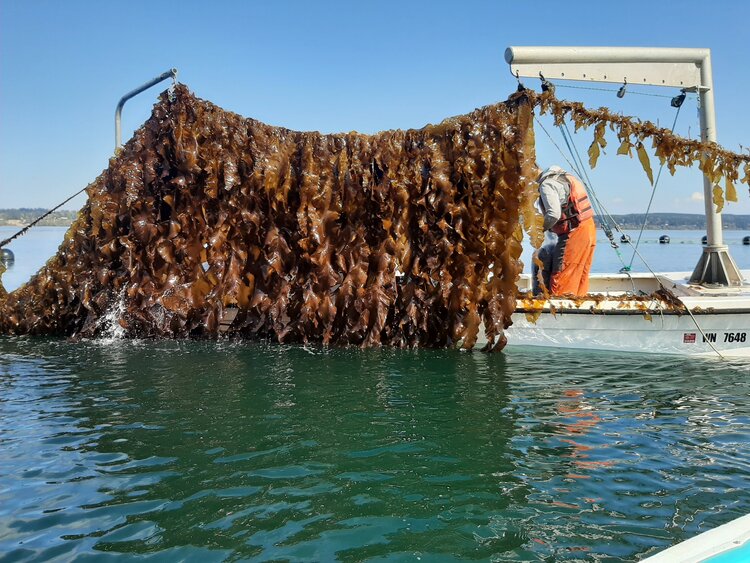 Prospective kelp growers who want to join the handful of existing commercial seaweed farms in the Pacific Northwest are having to contend with a lengthy permitting process. It’s gotten contentious in a few cases, but even so, at least a couple of new seaweed farms stand on the cusp of approval. Their harvests could be sold for human food, animal feed or fertilizer.

Two permit applications for floating kelp farms near Vashon Island, Washington, generated a flood of public comments to King County regulators. Some islanders strongly objected to what they said would be a risky "eyesore" offshore of their waterfront homes, while supportive commenters touted sustainable food and water quality benefits.

Applicant Mike Kollins wants to set up a 10-acre kelp farm in Colvos Passage to be called Vashon Kelp Forest. A different "Mike," Mike Spranger, envisions a separate 10-acre kelp and shellfish farm near the southwest corner of the island. Kollins said he is trying to be optimistic while navigating a permitting maze involving more than half a dozen federal, state, tribal and county agencies.

"It's a new industry, so understandably it takes time to figure out the ins and the outs,” Kollins said in an interview. “But I think it's going pretty well."

Island homeowners raised many of those issues in dozens of critical emails submitted to the county during a public comment period. Some suggested siting seaweed aquaculture in front of uninhabited shoreline instead.

“This introduces a visually disturbing, unnatural, rectilinear industrial footprint within the viewshed of a highly visited public natural area and upwards of 50 or more residences that are currently highly taxed, in part, on the basis of their views,” wrote Bob Spencer in his comment.

Sound Action, a small Vashon Island-based environmental group known for appealing permit approvals, raised concerns about both of the proposed kelp farms in its area. The group’s executive director questioned the wisdom of converting healthy marine habitat to commercial aquaculture and mentioned a fear that birds and marine mammals could become entangled.

In response, Kollins commissioned visual renderings that depicted his project as barely noticeable rows of buoys on the water. Kollins is pitching the kelp farm as a restoration project as much as a commercial venture. He explained that growing kelp improves the surrounding water quality and that the sea farm could shed spores to repopulate disappearing wild kelp beds down current.