Pacific Northwest
This figure shows the sea-surface temperature on August 1, 2011 before and after En4DVAR data assimilation (DA) correction. The black contour indicates the position of the upwelling front between the warm ocean water in the west and cold, upwelled water near the coast. « Supercomputer Models Improve Oregon/Washington Coastal Forecasts 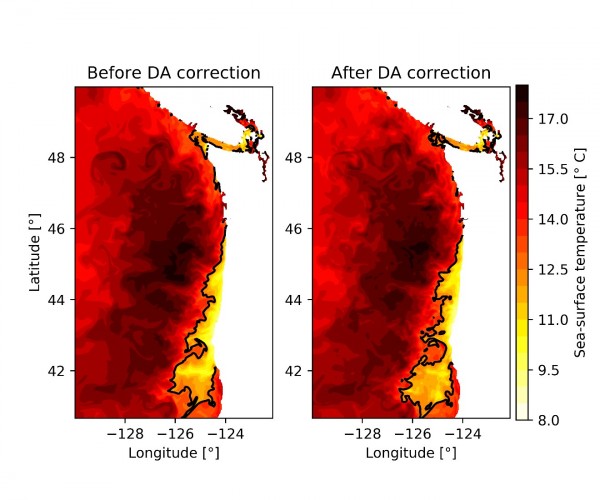 Newswise — Researchers at Oregon State University have been using the Comet supercomputer at the San Diego Supercomputer Center to test an algorithm that they believe will reduce errors in the widely used three-day forecasts for water temperature, salinity levels, sea heights, and currents off the coasts of Oregon and Washington.

To reduce the forecasting errors, Ivo Pasmans, formerly a doctorate student at the university, and Alexander Kurapov, an Oregon State professor specializing in ocean modeling and data assimilation, used Comet to combine forecasts with observations using an approach called ensemble four-dimensional variational data assimilation (DA), or En4DVAR, which is viewed as a novel oceanographic forecasting tool.

“Running the ensemble of model runs needed by En4DVAR is very time consuming and we could not have used the En4DVAR approach without the 20 processors (480 processor cores) available to us on Comet,” said Pasmans, now a research assistant professor at the University of New Orleans and lead author of a study published in the December 2019 issue of Ocean Modelling.

“To generate an ensemble that realistically represents the model error statistics, we assumed that errors in the model’s wind forcing were the main source of model error, and we built on this concept using satellite wind observations and what’s known as a Bayesian Hierarchical Model to estimate a probability distribution for the wind errors,” explained Pasmans.