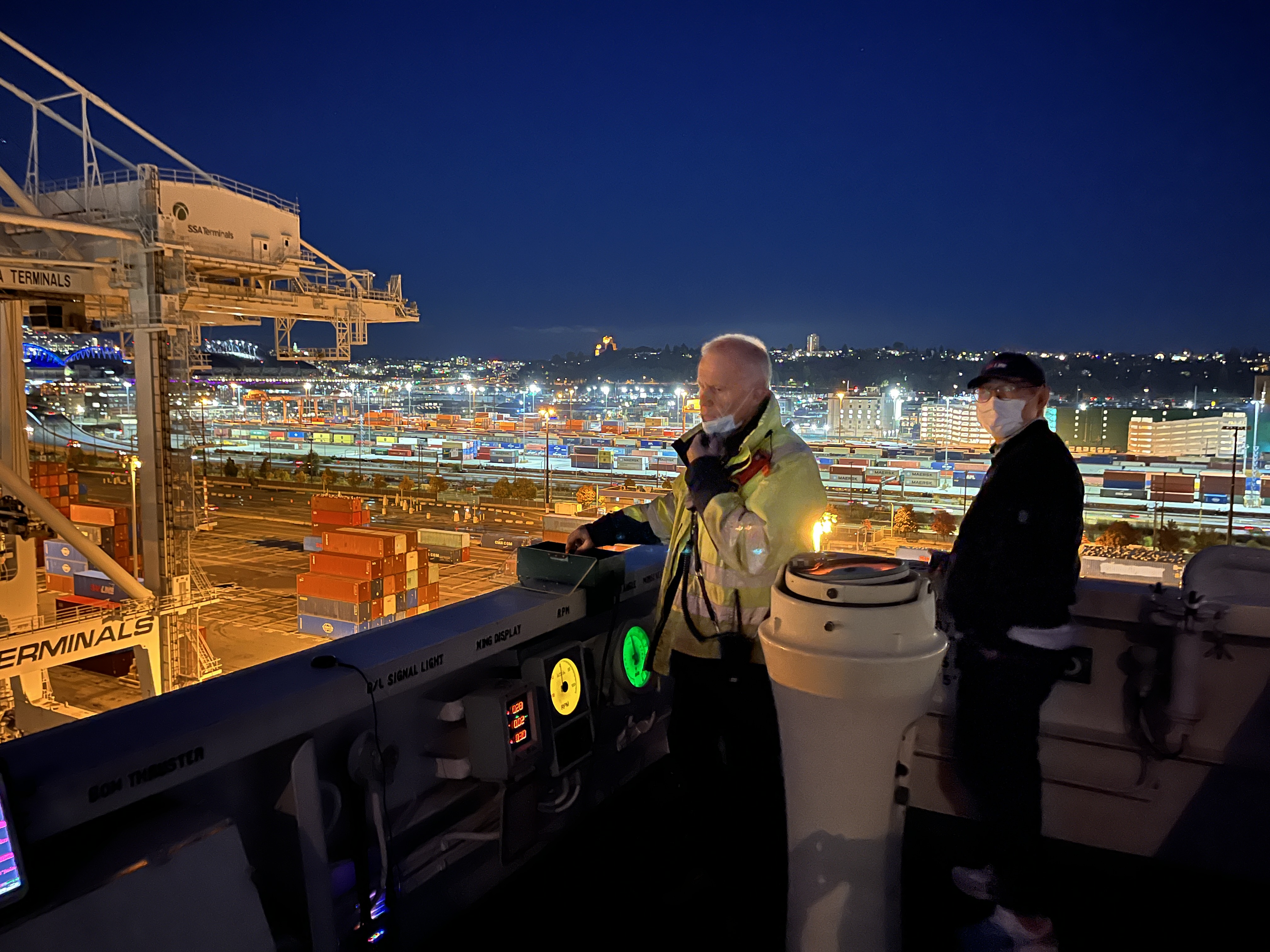 OR - Reducing collisions between ships and whales? There are apps for that, but they need work

Fortunately, it doesn’t happen very often in the Pacific Northwest that ships collide with whales. But when it does, it’s upsetting, tragic and the whale probably dies. Three separate teams have developed smartphone-based systems that can alert commercial mariners to watch out, slow down or change course when whales have been sighted nearby.

A recent ride-along on a big container ship demonstrated that real-time whale alerts are still a work in progress.

Puget Sound Pilot Jostein Kalvoy got the assignment to guide the 1,000-foot container ship SM Yantian out to sea from the Port of Seattle on a Friday evening in late October. The ship's bridge, 15 stories above the waterline, buzzed with the crackle of radios and clipped conversations in the crew's native languages of Korean and Indonesian when Kalvoy came onboard.

Captain Kalvoy soon had a lot to juggle: coordinating the tugboats, ordering the right amount of engine power, cuing the helmsman and watching the cross traffic of ferries and fishing boats. Plus, as if that weren't enough, an app on his smartphone told him critically endangered Southern Resident killer whales were sighted in the shipping lanes an hour to the north earlier in the day.

"If you see them, or you see a report, you want to make sure you keep alert and stay away from them, out of their path," Kalvoy said.

It's dark out by the time the ship passes Whidbey Island at reduced speed, that being the area where the endangered orcas were spotted earlier.

“I’m taking a look at the WRAS — the Whale Report Alert System app,” Kalvoy explained as he consulted a digital map on his smartphone specially designed for commercial mariners. “I don’t see anything, so I’m going to switch to a second app.”

That second app was another proprietary whale locations map. It drew upon the latest sightings from commercial whale-watching tour captains. The Pacific Whale Watch Association trade group lets the Puget Sound Pilots and state ferry captains use the PWWA app for free.

"We see there was a sighting this morning, about 10 hours ago," Kalvoy noted when he scanned the PWWA app for icons representing whales near the real-time location of his ship.

But the pressing question remained, where were the endangered orcas at the moment? At this point, I pulled up a third app named simply Whale Alert. It collects and shares sightings from the general public, mainly those submitted to the nonprofit Orca Network for now. On this night, the third app happened to have the most recent report. It showed the orca pod, 25 killer whales strong, had moved into Saratoga Passage, well out of the shipping channel.

"Safer for them, safer for us," observed Kalvoy with some satisfaction. But the ship pilot added that he can't do his job and simultaneously cross-reference three different whale apps.

"You can easily lose situational awareness once you get into the depths of it," Kalvoy said. "All of a sudden the minutes tick away and your focus becomes whale reporting and not navigating. That's not really what we want."

Where things get sticky

"One of our frustrations is there has got to be an easier way. It shouldn't matter where the information is coming from, as long as you're getting the information,” said Erin Gless, executive director of the Pacific Whale Watch Association, in an interview a few days later.

Most days, her group’s technology displays the largest number of recent whale sightings. Gless said the PWWA has been asked multiple times to share that data with WRAS, the separate, restricted app for commercial ship captains. Gless insists on reciprocity — if we give you our sightings, we want yours. The answer back from WRAS’ British Columbia-based operator, the conservation group Ocean Wise, is no dice.