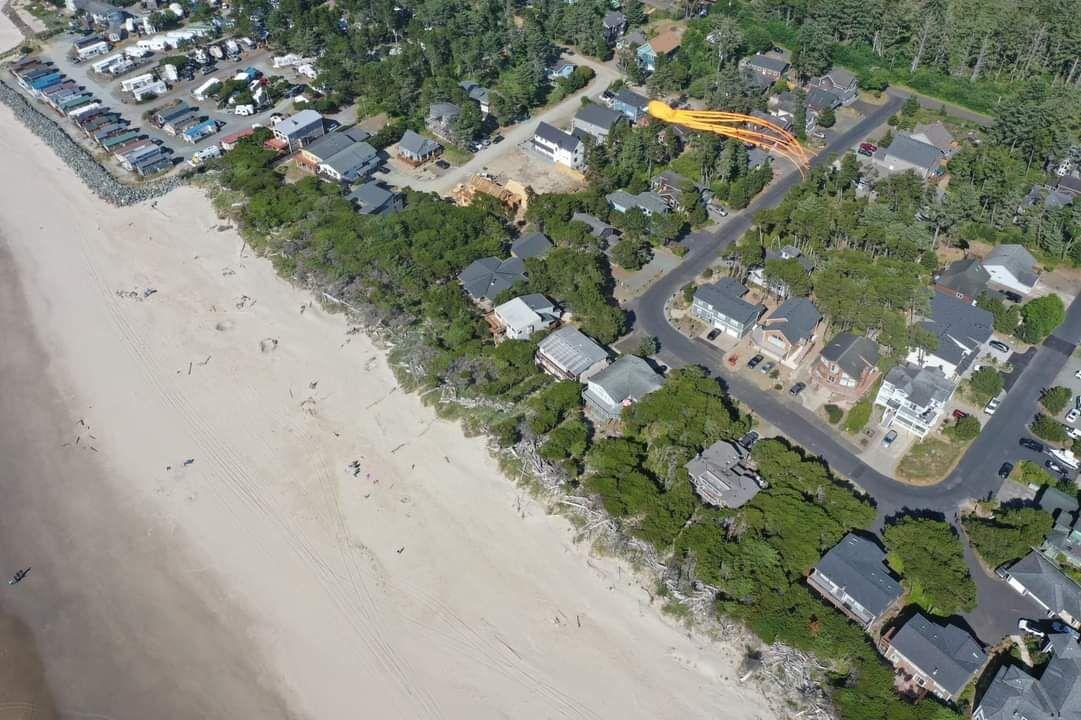 Conservation groups Surfrider Foundation and Oregon Shores Conservation Coalition are appealing a decision by Tillamook County that would allow a major shoreline armoring project to take place through an exception to statewide land use law.

On Friday, Nov. 5, the groups filed a Notice of Intent to Appeal a decision by the county’s board of commissioners to allow development of an 880-foot-long beachfront protection structure (a riprap revetment) on an active foredune in the Pine Beach area. The groups are jointly represented by the non-profit Crag Law Center. The Oregon Coast Alliance, represented by Sean Malone, has also filed a Notice of Intent to Appeal.

The properties in question have not demonstrated that they are eligible for shoreline armoring under Goal 18 of Oregon’s land use planning laws, which protects beaches and dunes. Only properties developed by Jan. 1, 1977 are eligible. The Tillamook County Board of Commissioners approved an “exception” to the state requirement at the behest of the property owners.

“Goal 18 exists to preserve our public beaches, and access up and down the shoreline,” said Phillip Johnson, Oregon Shores’ executive director. “It also protects the natural character of dunes and bluffs. Riprap and other types of shoreline hardening damage the public beach, and can eventually lead to the loss of the beach and blocking public access. Goal 18 was established to provide clear notice to developers that shoreline armoring wouldn’t be allowed, so that the Oregon coast wouldn’t turn into a wall of riprap. Allowing an ‘exception’ like this completely undermines the purpose of the law.”

Added attorney Anuradha Sawkar of the Crag Law Center, serving as pro-bono counsel to the groups filing the appeal, “By approving these applications, the county is demonstrating a preference to protect private development over the protection of the public's access to the beach and the future health of Oregon's coastal ecosystem."

The groups contend that the county wrongly determined that impacts from the project, including the loss of dune habitat and loss of beach access, would not negatively impact the public or the coastal ecosystem, despite evidence to the contrary. The beach that will be impacted by the project is an important recreational area, serving surfers, beachgoers and thousands of campers annually from adjacent Camp Magruder as well as the Barview Jetty Campground.

“Unfortunately, the county chose to support the interests of a handful of property owners over a statewide policy that protects Oregon’s beaches and dunes for everyone”, said Charlie Plybon Oregon policy manager for Surfrider Foundation.

This appeal is an important test for the statewide goal exception process as it pertains to shoreline stabilization approvals. The applicant is essentially asking Oregon to make an exception to state law protecting public beaches to allow for the taking of public property to protect private property. Coastal property owners and developers all along the Oregon coast who developed their properties knowing that shoreline armoring would not be allowed on their property will be watching this case and will be eager to apply for their own Goal 18 exceptions should the county approval stand.

Both Surfrider and Oregon Shores recognize that Oregon’s public beaches and shoreline are a public trust. Seawalls, riprap revetments, and other types of hardening damage this public trust. While Goal 18 grandfathered in structures that existed when it was passed, it was intended to conserve the public trust in Oregon’s shoreline by prohibiting the spread of armored shorelines. The beachfront houses for which the exception is being sought were built on vulnerable lands, in full knowledge that they were not eligible for riprap.

Both of the groups appealing the Tillamook County decision advocate for a more holistic, statewide policy addressing sea level rise and its effects on the shoreline, rather than the current piecemeal approach. Beyond the threat to public beaches and Statewide Planning Goal 18 that the case presents, the appellants hope that the case may also be a catalyst for a more holistic approach at the state level.