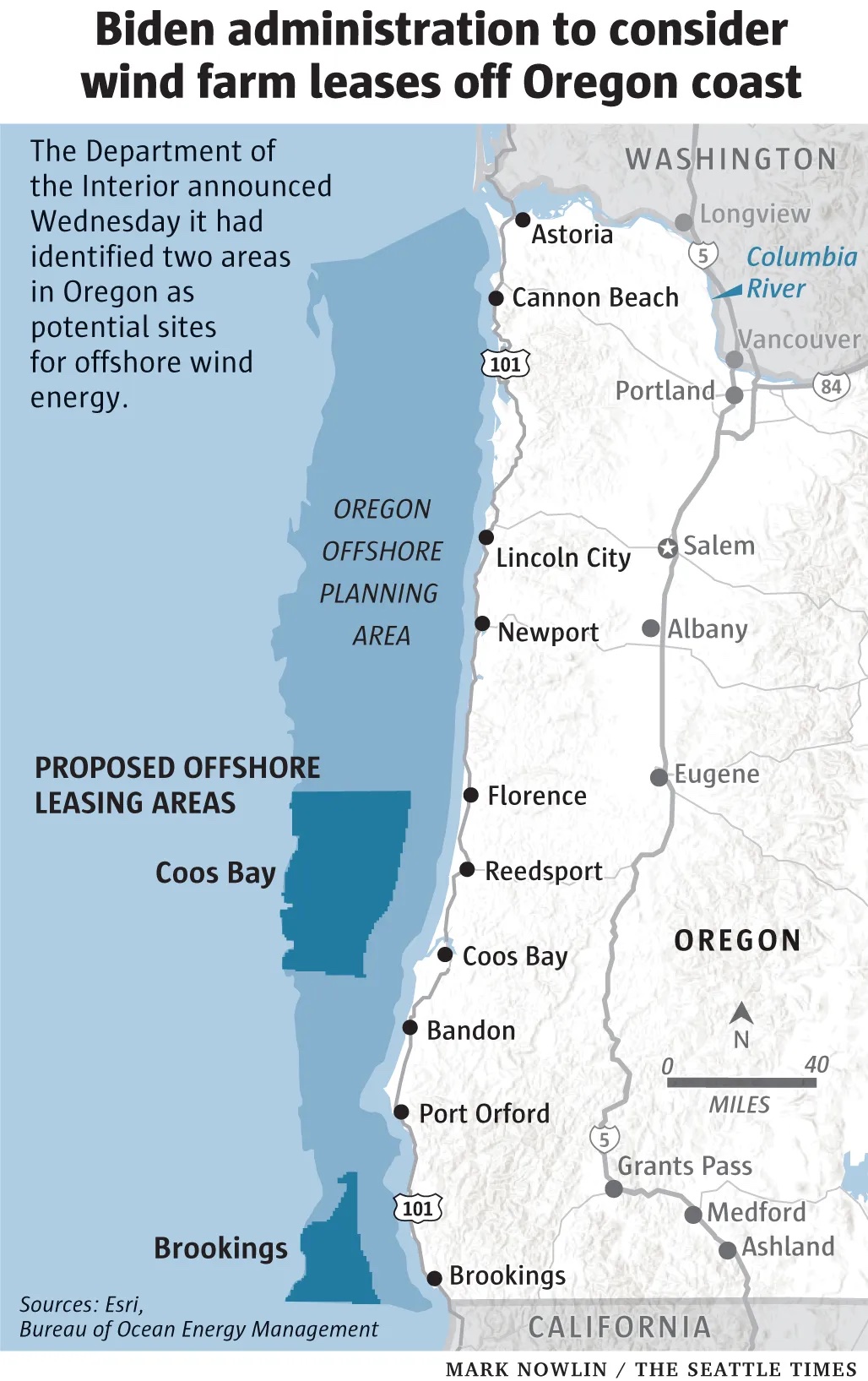 Two sites near the Oregon coast have been identified by the federal government as potential leasing sites for offshore wind energy. The sites are about 12 nautical miles offshore Coos Bay and Brookings.

The Bureau of Ocean Energy Management will assess areas in federal waters near Coos Bay and Brookings — both about 14 miles, or about 12 nautical miles, from the coast — as potential sites for offshore wind farms, the Department of the Interior announced Wednesday.

BOEM published a call for information and nominations to gauge commercial interest and public input on both sites. Public comments can be submitted here (regulations.gov) until the period ends in 60 days on June 28.

Several offshore wind-energy projects have been approved and begun construction along the East Coast as the Biden administration pushed to create 30 gigawatts of electricity through offshore by 2030. While topographical features along the West Coast — namely the deep drop in water depth along its continental shelves — present a technological conundrum, floating wind turbines could be the answer.

This project is an opportunity to help “make the West Coast a floating wind technology capital of the world,” said BOEM Director Amanda Lefton. “We’re really looking to get as much information as we can as early on in the process.”

The sites encompass an area spanning over 1.1 million acres near the south and south-central coast of Oregon. The calls for commercial interest and public comment will help BOEM identify technological constraints, areas of high wind speed, sensitive marine habitats, and potential impacts on commercial fisheries.

Oregon Public Broadcasting reports this is the first big regulatory step toward bringing an offshore wind project to the Pacific Northwest state.

While BOEM has not issued similar calls in Washington, the agency is in the process of reviewing two unsolicited lease requests from developers looking to initiate wind-energy projects along its coast.

One of those requests was submitted earlier this month by Seattle-based developer Trident Winds, which proposed a floating wind farm — the state’s first — about 43 miles off the coast of the Olympic Peninsula, near Grays Harbor.

“We will continue to evaluate those opportunities in the future,” Lefton said. Under the Biden administration, BOEM “has created tremendous momentum to make offshore wind a reality in the United States so that we can fight climate change and create good-paying jobs.”

“As we move forward, we are committed to doing so in a manner that robustly engages communities and avoid, as much as we can, impacts to other ocean users and marine life.”

​​​​​​​​​​​​​Oregon recognizes the merits of studying and planning for offshore wind, though it has not committed to deployment targets. HB 3375 (2021) requires Oregon Department of Energy (ODOE) to develop a legislative report that identifies the benefits and challenges of integrating up to 3 GW of floating offshore wind by 2030.​ ​

​
The Floating Offshore Wind Study will consist of a literature review by ODOE of relevant studies, followed by structured engagement with stakeholders.

​Pursuant to the law, ODOE's study will involve:

HB 3375 calls for broad stakeholder engagement with state, regional and national entities, and lists several specific stakeholders to consult with, including but not limited to:

Sign up to receive meeting notices and email updates about the study. The final report is due to the Legislature by September 15​, 2022.

ODOE will convene meetings to provide information and opportunities for feedback between January - May 2022. Materials and log-in information will be published below prior to the meetings.