Pacific Northwest
The crew aboard the FV Misty pulls up a pot of Dungeness crab off of Port Orford, Ore., May 17, 2022. The 2021-2022 season saw record high prices and a punctual start to commercial crabbing right on Dec. 1, 2021. Arya Surowidjojo / OPB 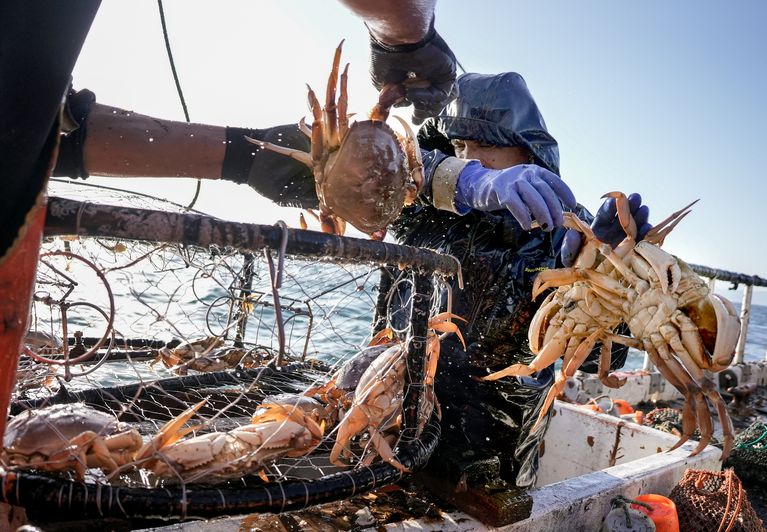 OR - After a six-week delay, Oregon’s commercial Dungeness crabbing season is now open

Dungeness crab is the most valuable single-species fishery commodity in Oregon. In the 2021-2022 season, fisherfolk harvested more than 17 million pounds of crab, bringing in an eye-popping $91.5 million.

But it’s not always like that. In fact, this year’s season opened six weeks later than anticipated, on Jan. 15. According to the Oregon Dungeness Crab Commission, average annual landings are around 16 million pounds. But recent harvests have fluctuated from a low of 3.2 million pounds all the way to a record high of 33 million pounds.

And the harvest could be facing additional challenges from the ongoing climate crisis.

Amanda Gladics is an Oregon Sea Grant associate professor of practice with Oregon State University’s Extension Service. Gladics spoke with OPB “All Things Considered” host Crystal Ligori about the fluctuations of the crabbing seasons and what the future holds for crabbing on the West Coast.

Ligori: This year’s Dungeness crab season actually just opened on Sunday [Jan. 15]. That’s more than a month later than expected. Can you talk us through that delay?

Gladics: So we started with a series of tests that check for quality of the product. We really want our crab to be full of meat when they hit the market, which is great for the consumer and for the efficiency of the resource. We want to really get the most out of the product in the season. So tests showed that meat yield was low, both on the north and the south portions of the coast. So that was the initial delay for the season. And then, right as we were set to open the season at the end of December, there was a test for a naturally occurring biotoxin, domoic acid, that revealed elevated levels in a small portion of the south coast. And so that really complicated the picture, and crab managers determined that the best path would be to delay the season opening until mid-January.

And this year actually, only portions of the coast are open to fishing. So there’s areas in the north and the south that are still under a further delay, and we expect those to open in a few weeks after some further testing. I think it’s really important for people to realize that last year, everything lined up perfectly, and not every year is gonna line up perfectly.

Ligori: What impact did these crabbing seasons and their fluctuations have on the coastal fishing communities?

Gladics: Yeah, it’s a really great question. I think fishermen and fishing communities are really good at buffering against these variations in both market conditions, fishing conditions, ocean conditions. All of their business plans do account for this uncertainty, and they’re very good at managing risk and uncertainty. But it’s still a challenge for all of our coastal communities that rely on commercial fishing and the revenue that comes from that to help support other parts of the community.