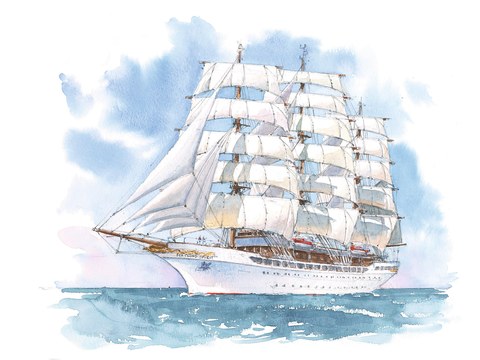 A rising tide of sustainably minded travelers are looking to cruise the old-school way.

Next summer, Sea Cloud Cruises will introduce its latest ship, the 136-passenger Sea Cloud Spirit. It will feature balcony cabins, a first for the company, as well as an extra-large fitness area and sundeck. Another soon-to-launch ship, the latest vessel from Star Clippers, will be the largest operated by the company and will feature a bi-level dining room that allows everyone to eat at the same time, while an onboard dive pool will offer scuba certification at sea. Both these ships, though, have one other thing in common beyond their luxurious amenities: sails. They’re both windjammers, or traditional sailing ships, with masts and vast riggings, around which the staff can scurry like old school sailors (expect Popeye-like biceps on Star Clippers, too, as most of the winches are hand-cranked rather than electric). Each of these cruise ships sails with a conventional engine installed, but will operate for 80 percent or more of the time at sea using wind energy. It’s a romantic notion: They will chart paths that follow the weather patterns much as windjammers might have done centuries ago. “The sails create a unique atmosphere on our cruises,” says Daniel Schaefer, CEO of Sea Cloud. “It’s not like a typical cruise line … . Sailing, and the ship itself, is part of the experience.”

Both lines are seasoned operators where every fleet member is a classic sailing ship. (Star Clippers operates a fleet of three masted ships that sail Asia, the Mediterranean, and the Caribbean, while Sea Cloud has two—notably its namesake four-masted vessel, which originally belonged to Marjorie Merriweather Post.) But more mainstream companies now are operating sailing ships: Take Windstar, whose three windjammers sail under engine and wind power simultaneously, or Ponant’s namesake three-masted clipper, the first in its fleet. Variety Cruises, which shuttles around the Greek Islands, also operates two old-fashioned sailing ships.

Sea Cloud’s Schaefer emphasizes that taking a trip this way differs markedly from sailing on a mega-liner. “Rather than rushing to the next port, we plan our itineraries so they’re half at land, half at sea, so people have the chance to have a real sailing experience,” he says. “We set the sails as often as we can, and our captains have the order to sail as much as possible.” They can also dock at smaller harbors— like Taragona in Spain, for example, or the inner harbor at Barcelona— and sidestep the crush of visitors that can hobble some peak-time itineraries.