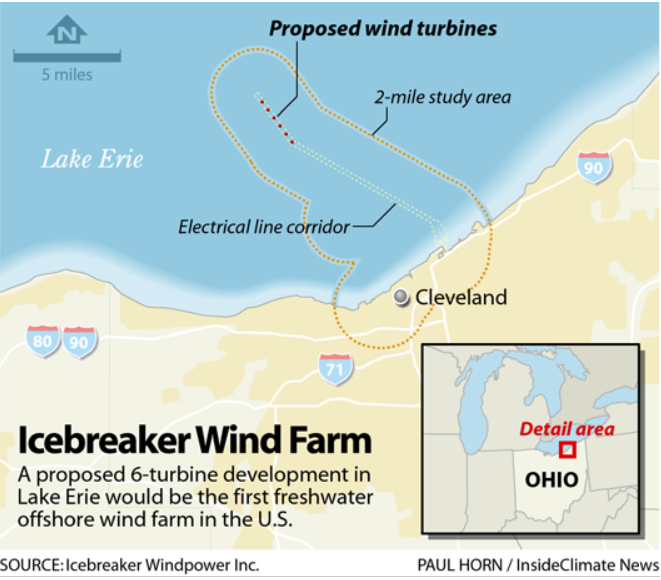 OH - An Offshore Wind Farm on Lake Erie Moves Closer to Reality, but Will It Ever Be Built?

Icebreaker would be the first freshwater wind farm in North America. But after more than a decade, it is still jumping hurdles and polarizing environmental groups.

On the rare clear day, the wind farm's turbines would stand offshore, resembling six matchsticks on the horizon.

If it is finally built off the coast of Cleveland, eight miles out in the shallow waters of Lake Erie, Icebreaker Wind would be the first freshwater offshore wind farm in North America. But the project, which has polarized Ohio's environmental groups for more than a decade, is now inching toward unprecedented success and away from total defeat.

The name of the project—Icebreaker—refers to the layer of ice that freshwater turbines, unlike offshore turbines built in saltwater, must withstand, and also is a nod to a new kind of wind power. Advocates say it could demonstrate the potential of the fledgling offshore wind industry, becoming a beacon for other Midwestern cities struggling to transition away from fossil fuels. Opponents argue that the technology is too new, the project costs too high and the studies about its impacts dangerously incomplete. And, to further complicate the issue, a coal company quietly poured money into other opponents' fights against the project.

The debate revolves not around Icebreaker's six turbines but around the industry its developer hopes to spark: hundreds, perhaps thousands, of turbines in Lake Erie and a city, Cleveland, powered entirely by offshore wind.