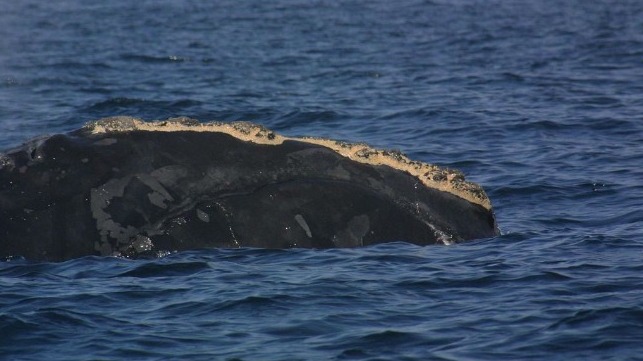 Environmental group Oceana has released the results of an analysis that it claims indicates ships are ignoring a voluntary speed zone in an area south of Nantucket designed to protect endangered North Atlantic right whales.

Oceana says that between January 22 and March 6, 2020, more than 41 percent of the 446 ships in the area exceeded the voluntary speed limit of 10 knots. The limit was established by the National Oceanographic and Atmospheric Administration (NOAA) to reduce the risk of injury and death to the whales. Only about 400 of the whales remain.

Studies have found that the speed of a ship is a major factor in ship-related collisions with North Atlantic right whales and that slowing ship speeds to less than 10 knots in areas where these whales may be encountered can reduce the risk of collisions by 86 percent.

NOAA uses two different types of management tools to help protect North Atlantic right whales from the dangers of ship strikes: mandatory Seasonal Management Area (SMA) speed zones in places where whales are expected to be, and voluntary Dynamic Management Area (DMA) speed zones where whales are seen. DMAs suggest that ships avoid the area and have a voluntary speed limit of 10 knots. In contrast, SMAs require ships to slow down to 10 knots.

Of the 183 ships exceeding the voluntary speed limit in this DMA, Oceana found that:

•     Most (92 percent) were large cargo and tanker ships, including one that was more than 1,100 feet long, going as fast as 18.4 knots.
•     Nearly all (96 percent) were flagged to foreign countries such as Panama and Liberia.
•     One ship reported a speed over 22 knots, more than twice the voluntary speed limit.

Conversely, Oceana found 88.4 percent of the ships transiting through the mandatory SMA near Block Island, Rhode Island were complying with the speed restriction.

Oceana senior campaign manager Gib Brogan said: “NOAA must do more to protect North Atlantic right whales, including mandating that ships slow down when and where these whales are present and increasing on-the-water enforcement to make sure they do so.”